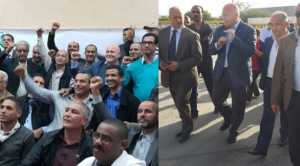 ITF general secretary Steve Cotton met with union leaders and activists across the transport sectors in Tunisia and Morocco to demonstrate support for the development of the affiliates, which has come as a result of the region having the fastest union membership increases.

06/11/2015 – Accompanied by the ITF Arab World co-ordinator Bilal Malkawi, in Tunis Cotton met the leadership of the UGTT and congratulated them on their well-deserved 2015 Nobel peace prize, which they were awarded along with other civil society organisations in the Tunisian national dialogue quartet for their role in helping to prevent the Jasmine revolution from descending into civil war in 2013 and contributing ‘to the building of a pluralistic democracy’.

His visit in Tunis ended in a meeting with the transport minister, Mahmoud Ben Romdhane, during which they discussed the urgent issues presented by transport unions during the visit and the vital role to be played by each party in order to move the transport sector forward.

As a result of this visit Cotton said: “I’ve been very impressed to see these two countries at the forefront in trying to build a better society for their workers. The ITF is commited to support and strengthen its affiliated transport unions in the UGTT and UMT, who strive to maintain and improve their national companies.

“We will move this work forward within the ITF priority projects in airports and public transport in both countries, through member education, sharing of similar experiences from other global transport unions and promoting unity.”