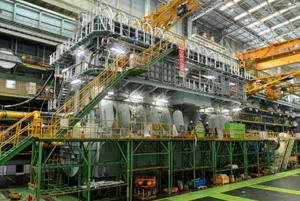 Alternate views of the 11G95ME-C9.5 engine during its shop test in Korea (courtesy Doosan) – side one

Doosan Engine has reported that the initial start of an MAN B&W 11G95MEC9.5 two-stroke engine took place during October 2015 at its works in Korea – a successful shop-test subsequently followed. Rated at 103, 000 horsepower,  the engine is the largest and most powerful engine from the MAN Diesel & Turbo portfolio ever designed and built.

The engine is the first in a series of six, bound for six 19, 160-teu container ships ordered by Mediterranean Shipping Company S.A. (MSC), one of the world’s largest shipping lines. 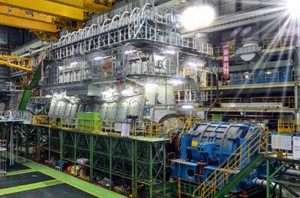 Alternate views of the 11G95ME-C9.5 engine during its shop test in Korea (courtesy Doosan) – side two

MAN Diesel & Turbo reports that it currently has orders for 28 × 11G95MEC9.5 units, all for vessels serving the international container trade.

The introduction of the G95ME-C9 was an important addition to MAN Diesel & Turbo’s G-engine programme. The G95ME-C9 engine, with a bore of 950 mm and a stroke of 3, 460 mm, provides 6, 870 kW/cylinder at 80 rpm and 21 bar MEP (in L1) and supplements the successful S90ME-C9/10 engine types by allowing the engine to be further de-rated thanks to the larger cylinder bore and/or fewer cylinders to be installed. 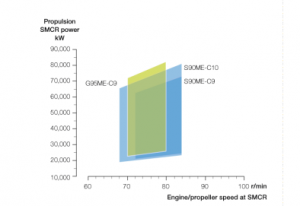