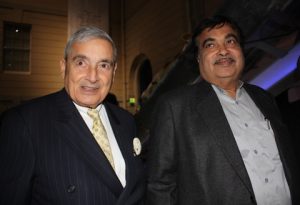 India’s shipping minister has pledged during a visit to London to forge ahead with his ambitious programme of reforms to shipping, labour, ports and regulation, and with accelerated road building.

The Hon Nitin Gadkari, minister of shipping, road transport and highways, told an audience of 60 maritime sector leaders that capital investment was vital to his target for the sector to add two percentage points in the next two years to gross domestic product, and in that way help tackle the basic problem India’s basic problem, that of poverty.

The Minister meets with guests..

Dr Ravi Mehrotra, executive chairman of Foresight Shipping, who hosted a dinner at the National Maritime Museum, Greenwich, in honour of Mr Gadkari, said the minister had already spearheaded initiatives which would give a boost to Indian shipping. “On behalf of the London international shipping community, I would like to assure you that you have just to ask for our support, and we will be there, ” Dr Mehrotra told the minister, who was making a stopover in the UK on his way to the United States.

The minister has enacted big changes since taking on his role in the government of Prime Minister Narendra Modi 18 months ago – as Dr Mehrotra put it, “he has become a legend in India.”

Mr Gadkari told his London audience of his determination to see “all our ports” connected to international-standard highways. The government’s Sagarmala project, which aims to develop port infrastructure, is likely to see an investment of more than Rs 70, 000 crore ($11.2bn) in the next few years.

He is seeking to change the structure of 11 of the 12 ports owned by the Indian government to make them function more efficiently, give them greater independence and enable them to raise funds more easily.

The target is for the ports major ports to add 100m tonnes capacity by 2018, and the minister said that the latest news was that they were achieving planned profitability.

More than 100 projects have been started at the ports, and greenfield projects for port development have been brought under the public-private partnership system.

Sites previously identified for new port hubs are Sagar Island in West Bengal, Vadhavan in Maharashtra, Colachel in Tamil Nadu and Tadadi  in Karnataka. The ports of Kandla and Paradip are among 100 sites the government wants to transform into “green smart cities.”

He has said that steps are under way to reduce the turnaround time for ships to two days from an average of four days, as ports are instructed to implement plans matching best international industry standards.

In addition to making better use of 7, 500 km of coastline, Mr Gadkari wants to convert rivers into inland waterways in order to move freight more economically than on the country’s choked and run-down roads. He has said in the past that the country’s logistics costs are three times that of China.

Inland waterway transport in India is said to be 30% to 40% the cost of moving goods by rail and even cheaper than by road.

With 290 light-houses and 1, 300 islands in the country, the minister said there was scope for adapting them to tourism and fishery.

Mr Gadkari has called himself a “bulldozer, ” a reputation that stemmed from his push for better roads while construction minister of Maharashtra state between 1995 and 1999. He is credited as the force behind the opening of the country’s first motorway, between Mumbai and Pune. Now he is in charge at federal level, he is overseeing spending on roads and bridges that is double that of the previous financial year and he is seeking to unfreeze schemes that have stalled amid legal disputes, financing difficulties, land shortages and bureaucracy.

He is, as Dr Mehrotra put it, planning to ramp up the pace of road-building to 25 km a day from 15 km a day at present.

During a lively question session at the Maritime Museum reception, the minister was asked how he could safeguard against potential corruption in the bidding process – it has been reported that $75bn worth of infrastructure projects is lined up for the next three years. Mr Gadkari said that “today the system is transparent… but any problems, come to me. I will see your problem is discussed.” He welcomed investment interest from overseas.

His ministry has announced that 13 rules under the amended Merchant Shipping Act 1958 have been rescinded as obsolete and unnecessary.  On six of them, there is a 30-day consultation process to receive any objections. The minister has been keen to replace or update the Act.

Dr Mehrotra welcomed the reservation of 50% of government cargoes for Indian-flagged ships; the sanctioning of 100% foreign ownership of Indian companies; the exemption of Indian crew from domestic income tax, and the support for port development.  All of this would help nurture “green shoots to Indian shipping, ” said the Foresight chief.

On the taxation front, the government in August 2015 brought in changes to a formula that had been blamed for deterring seafarers, especially officers, from continuing their career on Indian ships. It said that the period of stay of seafarers outside India would be calculated from the date stamped on their continuous discharge certificate until the signing off date, thereby allowing time spent by a ship in domestic territorial waters to count for non-resident status and hence tax relief, as would be the case if they served on foreign-flagged ships. 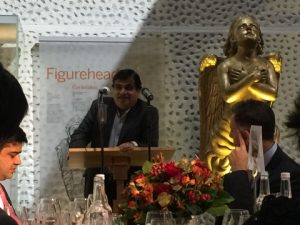 Dr Kevin Fewster, director of Royal Museums Greenwich, welcomed the party to the museum’s elegant dining area close to Prince Frederick’s 1731 Royal Barge. He said: “London is a historic part of world shipping, and we are lucky to think of ourselves as the natural home for the London shipping community.” He said that the museum attracted some 2.5m visitors a year.

Jeremy Penn, chief executive of the Baltic Exchange, who recently became a trustee of the museum, catalogued some of London’s maritime assets, including Lloyd’s and other insurers, legal services, and its role as the headquarters of the International Maritime Organization and many other international bodies. Ten per cent of the membership of the Institute of Chartered Shipbrokers was Indian, and 70 maritime professionals from Chennai and 148 from Mumbai had recently taken the Institute exams and qualified.

…and the Vote of Thanks by Ravi Mehrotra

Viewers can listen to Dr. Ravi Mehrotra CBE Vote of Thanks speech herebelow: