The President John M. Hadjipateras during his speech

On Saturday 21 November, 2015, on an unusual warm night due to the extended Indian Summer or…better say due to climate change, the Oinoussai Benevolent Fund’s* Oinoussian Ball took place at the London Marriott Hotel in Grosvenor Square attracting over 330 members, guests and their friends, mainly from the United Kingdom and Greece as well as from other places of Planet Ocean. John Faraclas writes:

From the drinks reception

The three hundred and thirty guests slowly filled the reception room as they approached and greeted old and new friends as well as relatives all in a jovial mood! Then all guests were asked to proceed to the specially decorated for the occasion Westminster Ballroom for dinner.

The new President of the Oinoussai Benevolent Fund, John M. Hadjipateras, who took over last year from Michael J. Monios, spoke movingly as he welcomed everyone to this 73rd anniversary, emphasizing amongst other issues, the continued need for fundraising to help all those in need from the students in the Merchant Marine Academy of Oinoussai to those with health and other problems, including the situation in Greece, and thanked everyone for their continued support and friendship shown, urging all to continue!

The past president Michael J. Monios spoke too thanking all for their support all these twenty years that he was on the board and from 2008 as president. A very passionate and patriotic short but to the point speech!

Then the very eloquent Vice–president/Secretary George T. Lemos took over introducing the order of …the night with the first surprise being the British-Iranian stand-up comedian Omid Djalili! Laugh, laugh, and laugh! He deserved the guests applause! Bravo!

Omid Djalili, yet another surprise

An excellent selected menu, needless to say the variety of wines and spirits served but the excitement come with the music which was well organised and performed by DJ Avgoustinos Galliassos. Dancing too was great combining international and Greek rhythms…

Great Raffle Prizes, nearly twenty, well presented, as always by George T. Lemos. Included were:  “five nights for two at the Elounda Mare Hotel in Crete”, a “cruise for two on board ‘Ocean Majesty’, another great one “four nights stay for two on the iconic Grace hotels in Greece, the USA of Latin America” and many useful others.

George T. Lemos and his wife

This year’s programme was very well edited and those who advertised proved once again their unsolicited contribution towards the scope of the Oinoussian Benevolent Fund! The Shipping Factor, always on top! Moreover as Greece and its eastern Aegean Islands are witnessing and subjected to the  worse ever migrants issue, an article by Harriet Alexander and Eirini Lemos is more than worth to read, describing the explosive situation on the Island of Kos and elsewhere!

Did I hear you say Mastiha? Well, thanks to Stavros Haidemenos, this unique Chiot liquor made the difference!

Now that there is also a website, www.oinoussaibenevolentfund.com, thanks to Konstantinos Varsis’ donation, communication and strengthening of the Oinoussian Benevolent Fund can be improved and furthered; so do log on!
Ending this coverage we would like to stress the big change in this event by having many young people participating, a good sign for the Oinoussai Benevolent Fund!

*The Oinoussai Benevolent Fund, (Tameion Efpragias Oinousson/TEO), was set up 73 years ago by Oinoussians living in London in 1942 to help those compatriots on the island who were suffering from war time difficulties. Today, the Fund provides vital assistance and support to those in need as well as supporting various projects which preserve Oinoussai’s identity and contemporize its heritage and culture. In the recent economic difficulties the Fund has dealt with issues of poverty, neglect and vulnerability for young and old alike who have suffered from this predicament.

The President and his wife Mrs. John Hadjipateras 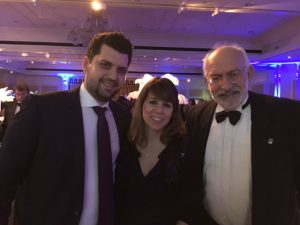