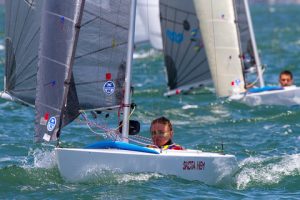 Thirteen nations have qualified for places at the Rio 2016 Paralympic Sailing Competition following the Para World Sailing Championships being held out of the Royal Yacht Club of Victoria in Williamstown, Melbourne, Australia.

National Paralympic Committees have until 1 March 2016 to confirm the qualification slots they will use. Any unused slots will be reallocated by 1 April 2016. Find out more on Rio 2016 Paralympic Games qualification here – http://www.sailing.org/tools/documents/2016ParalympicsSailingQualificationSystem-%5B16640%5D.pdf

Away from the road to Rio, the competition concluded with Damien Seguin (FRA) taking gold in the 2.4mR with Dan Fitzgibbon and Liesl Tesch (AUS) defending their title in the SKUD18. And there were some wild celebrations in the Sonar as John Robertson, Steve Thomas and Hannah Stodel (GBR) snapped up the title.

Several athletes will remain in Williamstown for the next ten days with several crews competing at Sailing World Cup Melbourne. From thereon in it’s into 2016, Paralympic year, and sailors will have their eye on the 2016 Para World Sailing Championships in Medemblik, the Netherlands along the way