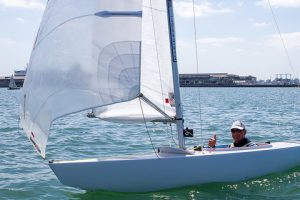 Light southerly winds awaited competitors on the last day of the Para World Sailing Championships conducted by the Royal Yacht Club of Victoria in Williamstown, Australia.

Although Dan Fitzgibbon and Liesl Tesch had the Para Worlds all wrapped up prior to the final race, there was no hint of complacency in the team.  During a pre-race delay while the race committee waited for the breeze to settle, the Australians spent their time adjusting the rig for today’s lighter weather, testing the result and tuning again.  Most other teams took the opportunity to simply relax and sail around the starting area. It was no surprise then, when the Australians burst away from the start line and quickly established a break on the rest of the fleet. They extended that lead throughout to finish well clear – an emphatic conclusion to a brilliant campaign for the World champions.

The Polish crew of Monika Gibes and Piotr Cichocki would have been pleased to score another second to add to yesterday’s result, which elevated them to fifth spot on the leader board. The Singapore pair of Jovin Tan and Desiree Lim scored a third place today, while the British team of Alexandra Rickham and Niki Birrell sailed a steady race to finish fourth today and cement their second place in the championship, well clear of the Italian pair of Marco Gualandris and Marta Zanetti, whose seventh today was good enough to maintain their spot on the podium. 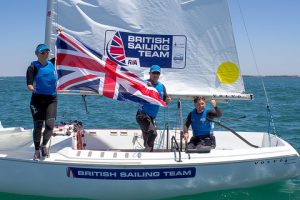 A delighted Niko Salomaa from Finland broke away from the chasing pack in the final lap of the 2.4mR fleet today, followed by the very consistent British sailor Megan Pascoe and Austria’s Sven Reiger.

All interest centred on the Frenchman Damien Seguin today.  Leading on points from Germany’s Heiko Kroeger, he kept the German in his sights throughout and clinched the world title with a buffer of seven points, with Kroeger in second place.  Third was Australia’s Matt Bugg, who said afterwards that last night’s nightmare of Britain’s Helena Lucas winning the last race while he languished back in fortieth almost came true, when he was buried in the middle of the pack while Lucas was among the leaders.  He found his way back however, his fourteenth place good enough to hold the British sailor out by just two points.

The Australian Sonar crew of Colin Harrison, Jonathan Harris and Russell Boaden had been dominant in the early part of the regatta but struggled in races 7, 8, 9 and 10 to be bumped off the top of the leaderboard.  In theory, a good result in today’s final race could redeem the position, but it would also rely on other boats in the race. Starting well today and showing good boat speed, the Australian crew were in the leading bunch in the early stages, with the British team of John Robertson, Hannah Stodel and Steve Thomas hot on their heels.  The Israeli combination of Dror Cohen, Arnon Elfrati and Shimon Ben Yakov managed to break away from the pack and went on for a very comfortable win by a margin of three minutes.  The American team of Rick Doerr, Bradley Kendell and Hugh Freund led the trailing bunch, ahead of the Australians. 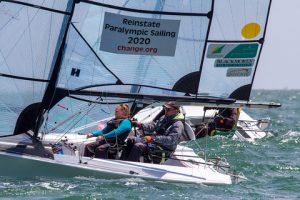 Following the race, the Australians lodged a request for the re-opening of a protest from race 4, in which they suffered damage following a collision with Israel.  The Israeli boat executed its penalty turns and avoided disqualification and the Australian boat was not granted redress. After a lengthy consideration of the detail, the jury allowed the boat to accept either average points or retain their second place for the race – effectively confirming the status quo.  In a fine gesture of sportsmanship, the Australians rushed over to the British crew to congratulate them immediately after emerging from the jury room.

The consensus among both competitors and officials is that this was a wonderful regatta.  It was certainly well run, and the wide range of conditions encountered ensured fair competition for all.

Several athletes will remain in Williamstown for the next ten days with several crews competing at Sailing World Cup Melbourne. From thereon in it’s into 2016, Paralympic year, and sailors will have their eye on the 2016 Para World Sailing Championships in Medemblik, the Netherlands along the way

ABB to provide power, propulsion and automation for world’s most advanced port icebreaker