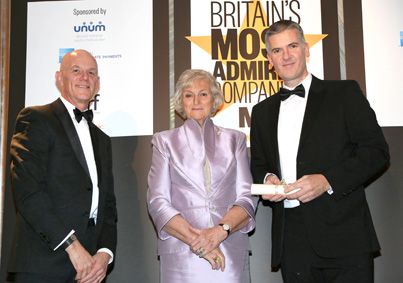 Martyn Ward, EVP of Operations, AVEVA and Alan Edwards, SVP of Marketing, AVEVA collect the Britain’s Most Admired Company in the Software and Computer Services Sector award at Claridges, London.

Cambridge, UK – 4 December 2015: AVEVA announced today that it has been ranked as Britain’s Most Admired Company for the Software and Computer Services sector for the second year running. AVEVA was selected for the Management Today award ahead of peers such as Sage, Micro Focus and Fidessa. AVEVA has also reached the top 24 in the overall Britain’s Most Admired Companies (BMAC) list 2015 which includes names such as Unilever, Royal Dutch Shell and AstraZeneca. AVEVA was recognised after scoring highly in categories including quality of products and business innovation.  This highly respected award celebrated its 25th anniversary this year in a ceremony at Claridge’s, in London, on 3 December.

‘This award is testament to AVEVA’s resilience’, said Richard Longdon, CEO, AVEVA. ‘Since we won the award last year, we have continued an active acquisition strategy while investing in our technology leadership, including the release of our new decision-support solution, AVEVA Engage™.  In addition, our business strategy of creating greater market diversification and expanding our solution footprint within existing customers is building strong momentum.

‘While this is a British award, it certainly reflects our success as a global business, which relies on our talented international team in over 30 countries. I am proud that we have continued to sustain a high level of success, despite the current challenges within some of our key markets. The BMAC award is a credit to my AVEVA colleagues around the world and a great way to start 2016!’

‘AVEVA continues its dominance in this category by winning Britain’s Most Admired Companies software & computers award for the second year running, ’ said Matthew Gwyther, Editor of Management Today. ‘AVEVA has demonstrated that it has once again stood out amongst its peers and is truly admired by its industry counterparts.  I would like to congratulate AVEVA on accomplishing the ‘double’, a great achievement in a competitive, innovative environment.’

AVEVA is continuing its innovative technology developments. This year it released AVEVA Engage, a decision support solution. It combines the power of instant access to a Digital Asset’s full contextually-integrated information with an impressively simple and entirely intuitive touch-driven interface, all visualised and navigable in a striking Ultra-High Definition (UHD) whole-model view.  Users can also gain access to AVEVA Experience™, an on-demand Cloud-based training environment. Currently users can try AVEVA Everything3D™ (AVEVA E3D™) for free. In addition AVEVA has showcased the powerful Design in Context capabilities of the latest release of AVEVA E3D.

About Britain’s Most Admired Companies

Now in its 25th year, MT’s ‘Britain’s Most Admired Companies’ awards offer a unique insight into the real factors behind corporate reputation. Winners are identified by peer review: Britain’s top companies and their bosses are asked to assess their rivals, a revealing exercise that really gets to the heart of what makes businesses succeed. Britain’s Most Admired Companies awards celebrate that vital ingredient: what it takes to be admired by your closest rivals.

About AVEVA
For almost 50 years, AVEVA software has enabled the creation of some of the world’s most complex power and process plants, vessels and offshore facilities. AVEVA’s Digital Asset approach ensures there is always an accurate digital representation of each physical asset. This allows engineering contractors, Owner Operators and shipbuilders to work more safely, more efficiently and with less risk throughout the life cycle of their projects and operations. AVEVA is the proud winner of the Frost and Sullivan 2015 Global Engineering Information Management Solutions Competitive Strategy Innovation and Leadership Award. For further information please visit www.aveva.com/ednotes.