GPR Class off to a Great Start 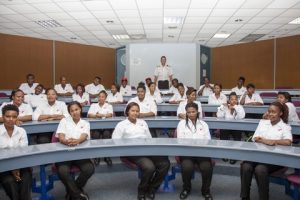 The class of 28 students is the first intake to be selected from TNPA’s adopted schools in Gauteng, East London, Richards Bay and South Durban Basin, where they attended Saturday classes in Science, English and Mathematics from Grade 10 to Grade 12.

This is part of ongoing initiatives that fall under Transnet’s Market Demand Strategy with the aim of developing core skills that will drive performance and ensure that the state owned enterprise has adequate and skilled personnel in the future.

TNPA’s Corporate Social Investment Programme includes various initiatives designed to build TNPA’s own capabilities within its ports by developing mission critical skills within its communities, explained Vishnu Govender, TNPA’s Marine Training and Development Manager, who has been raising awareness of these initiatives amongst communities. 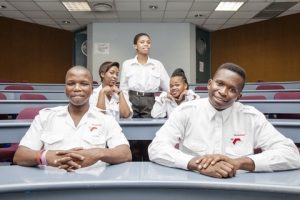 Below Left: General Purpose Rating (GPR) students Sabelo Buthelezi, Aphiwe Luthuli, Tracy Hlophe, Nomcebo Nkwanyana and Themba Kumalo are all smiles at the end of the first stage of their GPR maritime training at the School of Maritime Excellence – a four week bridging course in Mathematics

“Preparing youth for maritime careers is one example of how we can meet the needs of the ports while uplifting surrounding communities. The students, who are all from disadvantaged backgrounds, are being prepared for a brighter economic future that will have a positive impact on their families and communities.

“We are proud of our bursary students doing the General Purpose Rating course, who are a vital part of our asset base, ” he added.

After this they will go to sea and put their theory to the test. They will first complete two months learning the practical side of being on deck and in the engine room in the ordinary seafarer roles, followed by six months learning the able seafarer engine and deck roles, after which they will select either role. Thereafter they will qualify with a General Purpose Rating.

They will graduate with Certificates of Competence in Able Seafarer Engine, Able Seafarer Deck and General Purpose Rating, which makes them highly employable.

Students shared their joy at being selected for this programme:

“This is a great opportunity and privilege that will open many channels and enable me – an orphan from Johannesburg – to focus on my studies and become financially independent.”

“I am the last born.  My mother is a 58 year old hawker and my father is 63.  I studied hard to get here because I want to be an independent woman.  I am grateful to TNPA who have provided everything – the only thing we have to do is learn.”

“I have six siblings on my mother’s side and six on my father’s side. I went to school at Forest High and only joined the Saturday classes in Maths and Science in Grade 11. Wow, I couldn’t believe that I was selected for the GPR training.  It means I will be able to support my family. ”

“I am doing this for my mom who always believed in and supported me.  It’s my opportunity to take our family to the next level and I want to make sure she gets the best from me.  We have had wonderful treatment from TNPA. We’ve been given accommodation, food, even uniforms so we don’t have to worry about what we have to wear.  We are free to learn – not compare!”

“I feel so lucky to have been chosen from the group of 20 at my school – Dr BW Vilakhazi.  It’s by the grace of God that I am here.  We are not just studying, but learning from each other and making friends with people from other regions in South Africa who speak different languages.”

Schenker Logistics to expand its land transport network in the UK