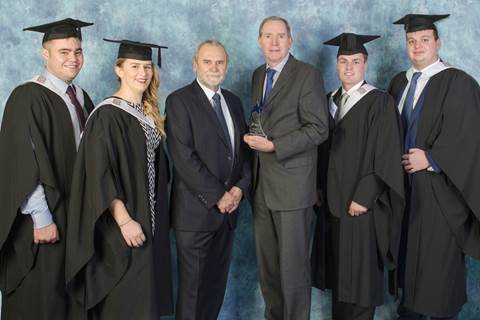 The first group of Associated British Ports (ABP) marine apprentices have completed the main academic element of their training by graduating from South Tyneside Marine School with a Professional Diploma in Shipping and Maritime Studies. They are now starting the fourth and final year of their apprenticeships working in the Humber ports.

The diploma, accredited and approved by the Scottish Qualifying Authority has been an overriding success with 13 ABP marine apprentices joining the course since 2012.

The apprenticeship scheme was developed in order to maintain the highest professional marine standards within ABP’s port and harbours marine operations. It is intended to ensure that non-sea going students will have sufficient marine knowledge for key roles in the operational Marine teams controlling shipping movements within the country’s busiest ports.

Not only did the team graduate with flying colours, Keeta Rowlands who was amongst one of ABP’s first marine apprentices, received a special award for gaining the highest marks in the diploma.

Marine Training Manager, Martin Gough said: “I am extremely proud of these apprentices, all of whom passed their HND with distinction.”

The group now have the knowledge to progress, with steady and continuous professional development, to become ABP’s future Dock and Harbour Masters.

Martin continued: “As a group they have always applied themselves diligently, both individually and as a team, to both academic studies and the practical tasks that make up the apprenticeship content. They are a pleasure to work with and as the leading group have helped in refining some aspects of the apprenticeship scheme which has benefitted the two groups following behind them.”

This year, ABP also launched the UK’s first Marine Pilotage Apprenticeship scheme, which offers an alternative entry route into pilotage, to mariners who have gained their first level marine qualification. The course will give three applicants the opportunity to train with the team that controls the shipping movements on the Humber Estuary, the UK’s busiest trading gateway and in ABP’s South Wales ports.