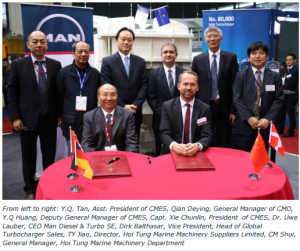 MAN Diesel & Turbo marked the sale of its 60, 000th turbocharger after 80 years of turbocharger business, during the Marintec 2015 marine trade fair in Shanghai, by making a presentation to turbocharger customer, China Merchants Energy Shipping Co. Ltd. (CMES). The milestone has been reached with the (coming) delivery of 2 × TCA66-21 turbochargers, bound for an MAN Diesel & Turbo MAN B&W 7G80ME-C9 two-stroke engine powering a VLCC.

The ceremony took place at the MAN stand at the trade fair where MAN Diesel & Turbo’s CEO, Dr Uwe Lauber, presented representatives from CMES with tokens of the company’s appreciation.

At the presentation, Lauber said: “Understanding markets starts by listening to the customer. We have enjoyed an outstanding cooperation with CMES over many years, and are delighted to be able to celebrate this milestone with such a valued partner.”

He continued: “Over the last two decades, the level of shipbuilding activity in
China has increased dramatically and China is of vital strategic importance for
our Turbocharger Business. MAN Diesel & Turbo is one of the leading
turbocharger suppliers for marine diesel-engine manufacturers in China and,
with our localisation strategy in the shape of our facility in Changzhou, we are
able to support our European production, shorten delivery times and cut
transportation costs for the benefit of our Chinese customers.” 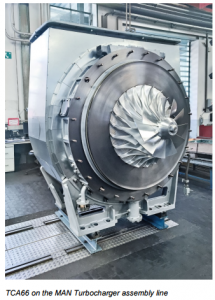 Also speaking at the Marintec ceremony, Dirk Balthasar – Head of Global
Turbocharger Sales and Promotion – MAN Diesel & Turbo, said: “Through
continuous development, TCA turbochargers have become the most reliable
and proven series in the market. Since its initial introduction, the TCA has
improved and undergone several technological developments, and the
product we deliver today bears all the benefits of these.”

Balthasar added: “Just to name one of them, we have re-designed the TCA’s
bearings to increase their overall lifetime. As a result, we were able to
announce last year that bearing inspections are no longer required until the
first main overhaul. The direct benefit for customers is savings in both time
and money. Going from dry-dock to dry-dock without any intermediate
inspection is now a reality.”

The VLCC will be delivered in 2016 from Shanghai Waigaoqiao Shipbuilding
Co., Ltd. and China Merchant Energy Shipping decided to source the engine
and turbochargers from the same manufacturer. The CSSC-MES Diesel
(CMD)-built MAN B&W 7G80ME-C9.2 main engine is part-load optimised with
exhaust-gas bypass tuning and integrated with the two MAN TCA66
turbochargers.

Turbocharger no. 60, 000, with serial number 7037348, was assembled at the
MAN Turbocharger factory in Changzhou where most Chinese turbocharger
components are localised. Core components, such as bearings and rotors, are
produced at MAN Diesel & Turbo’s German facilities.
The MAN TCA Turbocharger series was introduced to the market in 2003 and
has more than 7, 000 references. Globally, TCA turbochargers are mainly
employed in two-stroke applications, but also have multiple four-stroke
references.

MAN Diesel & Turbo developed its first turbochargers in 1934. As an industry
leader, MAN Turbocharger was first to set a standard for inboard, plain
bearings for turbochargers with the TV624 type. In 2000, Czech turbocharger
manufacturer PBS Turbo joined the MAN family and is today an affiliate within
MAN Diesel & Turbo. PBS Turbo produces all TCR sizes from TCR10 up to
TCR18, while larger sizes – TCR18 to TCA88 – are produced by MAN Diesel
& Turbo in Augsburg.

Affiliated to the China Merchants Group, China Merchants Energy Shipping
Co., Ltd. (CMES）was jointly established by the Sinopec Group, Sinochem
Group, COSCO Group and CNOOC Group on 31 Dec 2004 based on the
integrated ocean shipping assets under China Merchants Group. CMES runs
a modern and diverse fleet of ocean-going tankers, bulk carriers and liquefied
natural gas ships, covering most commodities of energy transportation.
CMES operates and manages the earliest and most experienced oil-tanker
and bulk-carrier fleet and is one of the largest energy-transportation
enterprises in China. The fleet consists of 38 oil tankers of about 10 million
DWT, 13 bulk carriers of 1.56 million DWT and 6 LNG ships of 0.9 million
cubic meters (0.5 million DWT), with a total capacity of 11.28 million DWT at
the end of Feburary, 2015. An additional 20 vessels are on order with delivery
due over 2015 to 2017. CMES is building up a well-structured, highly
competitive and sustainable developing fleet. CMES, jointly with COSCO
Group, established the first LNG fleet in China and six LNG carriers are now
fully engaged in the importation of LNG into China.