Olympic Dreams on the Line at Sailing World Cup Miami 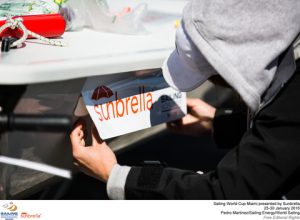 With the calendar switched to an Olympic year, the intensity on the water at the 2016 Sailing World Cup Miami presented by Sunbrella is a match for the famously bright South Florida sun. In less than 200 days, many of the nearly 800 sailors gathered in Coconut Grove this week will walk in the Opening Ceremonies of the 2016 Rio Olympic Games and the Paralympic Games. For the sailors with a confirmed spot in the Olympic Regatta, this event is about sharpening their tactical game, refining their equipment and improving their conditioning. Others have a more immediate focus as they are in the midst of a selection series for their respective countries or working to qualify their country for the Olympic regatta.

“There’s a lot at stake this year at Sailing World Cup Miami, ” said Josh Adams, Managing Director of U.S. Olympic Sailing. “For the first time in the event’s 27-year history, it’s being used as part of the U.S. selection process and part of country qualification process for the 2016 Olympic Games.”

For American sailors in eight of the Olympic classes and the 2.4mR, this event is the first of two events that will determine the U.S. Olympic Sailing Team for this summer’s Games.

The Sailing World Cup Miami presented by Sunbrella is the second event in the six-regatta 2016 Sailing World Cup. Competition in US Sailing’s premiere racing event gets underway this Monday in all 10 Olympic classes and two of three Paralympic classes. Saturday’s Medal Races will be carried live on ESPN3.

Befitting an event of this magnitude, this evening athletes, volunteers and regatta officials participated in an Opening Ceremony on the lawn of the Coral Reef Yacht Club. The 68 national flags ringing the lawn—and the variety of languages heard in the various boat parks—are a stirring reminder of the global popularity of this event. The event record of 855 sailors, which was set last year, is safe; the 2016 edition of the Sailing World Cup will rank third in terms of attendance. The 68 nations attending breaks the record set in 2015.

“Sailing World Cup Miami is a pivotal event for Olympic sailors on the road to Rio. The caliber of the athletes that will be on show in Miami is exceptional and many of the medalists here will be on the Olympic podium in August, ” said Sailing World Cup Manager, Antonio Gonzalez de la Madrid. “Racing in Miami in January provides a welcome respite for the European sailors looking to escape the European winter. We have World Champions Giulia Conti and Francesca Clapcich (ITA) in the 49erFX, Billy Besson and Marie Riou (FRA) in the Nacra 17 and Danish Laser Radial star Anne Marie Rindom. That’s to name but a few in the world class fields we have on show in the ten Olympic and two Paralympic events.”

The trickle down of having all these top international athletes training and racing in the United States every January should not be understated.

“The training leading up to this regatta is at a very high level, ” said Adams. “For the US Sailing Team Sperry and our overall Olympic program, there’s great value in this event. Our athletes are able to go out and train against the world’s best.”

Racing gets underway tomorrow at 10 a.m. (EST), weather providing and will run until the late afternoon each day through Friday. Saturday’s double-point medal races—a shorter sprint for glory with just the top 10 sailors in each class competing—will start at 11 a.m., and be broadcast live on ESPN3.

Sailing World Cup Miami
The Sailing World Cup Miami 2016 presented by Sunbrella is the premier North American event for top-level Olympic and Paralympic class sailors, and the only North American regatta to be included in World Sailing’s 2015-16 Sailing World Cup series. Competitors in the 10 Olympic and two Paralympic events will have five days of fleet racing from Monday, January 25 to Friday, January 29. Medal Races across the Olympic classes will bring the regatta to a close on Saturday, January 30, where medals will be awarded to the top three boats. The regatta is organized by US Sailing.

Regatta Headquarters will be located at the US Sailing Center Miami, a U.S. Olympic Training Site, in Coconut Grove, Miami, Fla. Additional hosts for the event include the City of Miami’s Regatta Park, Coconut Grove Sailing Club and Shake-A-Leg Miami. The Coral Reef Yacht Club hosts the Opening and Closing Ceremonies and is the site for the Regatta Village throughout the week.

US Sailing
Sailing World Cup Miami Presented by Sunbrella is organized by the United States Sailing Association (US Sailing), the national governing body for sailing, which provides leadership, integrity, and growth for the sport in the United States. Founded in 1897 and headquartered in Portsmouth, Rhode Island, US Sailing is a 501(c) (3) non-profit organization. US Sailing offers training and education programs for instructors and race officials, supports a wide range of sailing organizations and communities, issues offshore rating certificates, and provides administration and oversight of competitive sailing across the country, including National Championships and the US Sailing Team Sperry. For more information, please visit us at www.ussailing.org.

The 2016 Sailing World Cup will consist of five regattas for all ten Olympic events and where possible, Formula Kite Racing. Qualification places for the Sailing World Cup final are up for grabs at each event. The final will bring together the top 20 boats in each Olympic event and an Open Kiteboarding event where the World Cup champions will be crowned

For more information about World Sailing please go to isaf.com or contactmarketing@isaf.com

World Sailing is made up of 141 Member National Authorities (MNAs), who are its principal members, and responsible for the decision making process that governs the sailing world.

There are currently more than 100 World Sailing classes, ranging from the small dinghy classes for young people up to 60 foot ocean racers.