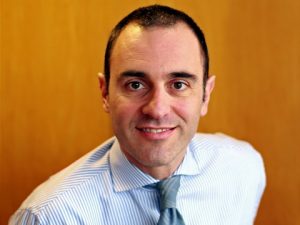 JFD, one of the world’s leading subsea operations and engineering companies, has today announced the appointment of Valerio Percoco as Sales Director. The appointment follows the company’s significant growth over the past 12 months, which included a significant contract win with NATO, as well as the merger of James Fisher Defence, Divex and the National Hyperbaric Centre to create the world’s largest provider of subsea operations and engineering solutions, equipment and services for defence and commercial markets.

Valerio Percoco joins JFD from Offshore Installation Services (OIS), the leading subsea integrated project management service provider. Through a series of leadership and project management positions, including several roles in the offshore industry, he has successfully steered a number of major projects and achieved substantial business growth and expansion. He brings a wealth of experience and skills to his new role in driving ambitious growth targets through to fruition as JFD continues with further development and expansion in both new and existing markets.

“We are very pleased to welcome Valerio to the team, and I am confident that he will provide a significant contribution to the continued growth of JFD.

“2015 was a landmark year for the business, following a number of mergers and acquisitions which broaden our range of capabilities and services in the defence and commercial diving markets, as well as several significant contract wins including the landmark £12.1m contact for the provision of the NATO Submarine Rescue System (NSRS). It is therefore important that we further develop the infrastructure of the business and scale up accordingly to ensure we are able to meet the demands of our global customer base, both now and in the future.”

JFD also recently announced the expansion of its UK footprint in support of its continued growth, with the opening of new offices in Glasgow and Bristol. The company operates from a strong global presence across all markets including Europe, North America, Asia and Australia, ensuring that it is able to respond quickly to customer demands anywhere in the world.

JFD is one of the world’s leading subsea operations and engineering companies. JFD was created in 2014 through the merger of James Fisher Defence and Divex. In 2015 JFD acquired the National Hyperbaric Centre to further boost the services offered to its customers.

Today JFD designs, builds, operates and maintains complex diving and underwater systems for customers in Defence and Commercial industries. To date, JFD’s products and services have been delivered to more than 80 countries across six continents.

James Fisher and Sons plc is a leading service provider in all sectors of the marine industry and a specialist supplier of engineering services to the nuclear industry in the UK and abroad. Operating in over 40 countries worldwide, the company serves both the private and public sectors and adopts a practical approach to the management of assets and provision of high quality services, ensuring an appropriate use of technology and a sound understanding of each customer’s requirements. Building on the experience and expertise gained over more than 165 years of operating in the marine environment, James Fisher brings practical experience, innovation and commercial best practice to all clients’ projects and services.

LNG retrofits will rate higher under CII than...