Electronic Superhighway (2016-1966) at the Whitechapel Gallery… 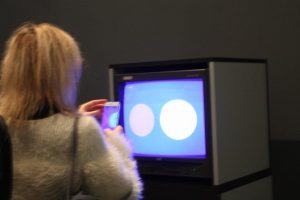 Since our earliest days, men and women have created technology; today we are living inside a simulated world generated by computers. This interpretation of modern society emerges as we travel – backwards in time – through Electronic Superhighway (2016-1966),  an exhibition of extraordinary breadth presented by Whitechapel Gallery across four of its galleries.

This show, which reminds us whence the gadget generation of 2016 came, speaks to a history of cyber-culture, up to the stage where we are giving over an element of our autonomy to the giant technology companies, says curator Omar Kholeif. 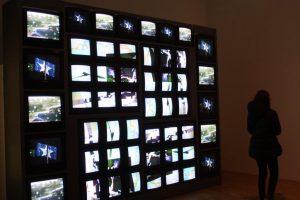 The institutional monster does not even need to exercise overt persuasion to sweep millions of users into its clutches. As we surf through levels of computer ‘windows’ granting us a seeming mass of free images, someone, and we do not usually know exactly who that is, is looking at us, and collecting more information on us than we have on them.

So addicted is a huge portion of the planet (more than 1bn people use the smart-products of tech giant Apple, and its rivals are looking to carve out similar empires) that already in a 2004 video,  A Family Finds Entertainment, made by Los Angeles-based Ryan Trecartin, a teenager at a party can, admittedly in parody, call someone in his circle and say: “Hi, this is Shane.  I need to know why you aren’t documenting me.” There is much more dealing with identity and consumer culture in this campy 40-minute production, shown within the Whitechapel exhibition. 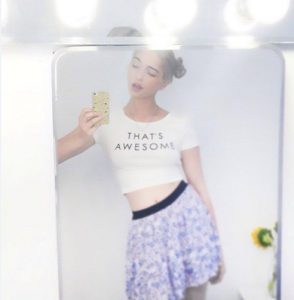 Creativity is being shrunk into ‘data, ’ whether big or small, and ‘apps.’ There is a hidden rationality behind random ‘search’ results. Algorithms rule our connections, and are the new advertising media.

When they can, artists get their own back on the encroachment by virtual reality, using the technology both to create works and to criticise its voracious appetite for swallowing individuality: some use the hyperlink and URL as raw materials; others a browser for the canvas; one downloads what amounts to a digital toolkit of paintbrushes and other tools of the trade.

Whitechapel is displaying, until May 15 2016, more than 100 works from 70 artists to instance, in reverse chronology leading to the mid-1960s, the impact of computer and Internet technologies on artists.

Electronic Superhighway – which felicitously enticed a huge press audience on preview day – opens with pieces made between 2000 and 2016, and ends retrospectively half a century ago with the genesis of the hybrid artistic practice of which it treats. The catalyst seems to have been Experiments in Art and Technology (E.A.T), which in 1966 in New York brought together 40 engineers from Bell Laboratories and 10 contemporary artists including Robert Rauschenberg, John Cage and Yvonne Rainer, in performances that incorporated new technology. Just a year later, in Stockholm, Ulla Wiggen was painting an acrylic, entitled TRASK, after the first Swedish electronic computer known as BESK. Trask means swamp in English. Ulla Wiggen had been a performer at an E.A.T. meeting.

E.A.T claims to have staged the first international exhibition of art and technology,  Some More Beginning (1968), at the Brooklyn Museum; and in the same year the UK which put onCybernetic Serendipity attracting nearly 60, 000 visitors to the Institute of Contemporary Arts in London. How nice it is to see in a display case now an LP (which ahead of the vinyl revival of the past three or four years would have seemed quaint) and its cover, of the music from the London exhibition.

Experiment flourished in the 1960s and 1970s on the back of expanding technology. Artists such as Manfred Mohr, Vera Molnar, Frieder Nake and Stan VanDerBeek adopted computer programmes to create abstract and geometrical works, and Roy Ascott, Allan Kaprow, Gary Hill and South Korean video art pioneer Nam June Paik (1932-2006) swiftly cottoned on to the globalised reach of new media to connect across multiple sites.

In fact, the term Electronic Superhighway is attributed to the South Korean, who foresaw the potential of global connections through technology. He hit upon the expression in 1974, and20 years later he was still playing the theme for all he could (the exhibition includes Internet Dreams (1994), a video-wall of 52 monitors displaying electronically-processed abstract images.) 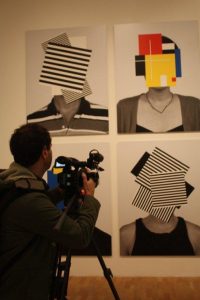 On New Year’s Day 1984 Paik broadcast material live and pre-recorded from artists including John Cage and the Thompson Twins, from satellite-linked television studios in New York, West Germany, South Korea and the Pompidou Centre in Paris, to an audience estimated to have been of 25m viewers worldwide. Paik saw that transmission,  Good Morning, Mr Orwell, as a response to George Orwell’s negative vision of 1984.

Then the World Wide Web shook up the world, and the artistic scene. The invention by Sir Tim Berners-Lee of the open source ‘information’ grid in 1989 was more than a powerful means of communication, for it fuelled imagination of fine artists.

Innovators such as Moscow-born, now Stuttgart-based, Olia Lialina adopted the internet as a medium. In My Boyfriend Came Back from the War (1996) she presents a love story enacted via an interactive black and white browser screen. She was making it at a time – can it really be only 20 years ago – of rudimentary web graphics and slow-speed browsing. 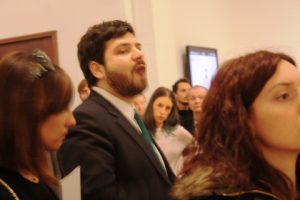 The inventiveness of net art is explored through a selection of interactive browser-based works from the Rhizome archive, a digital arts archive which “supports contemporary art that creates richer and more critical digital cultures.” Founded in 1996 by artist Mark Tribe, it has been affiliated with the New Museum in New York since 2003. In 1999, Rhizome created a collection of ‘born-digital’ artworks which has grown to more than 2, 000.

Whitechapel’s exhibition examines the dot-com boom, from the late 1990s to the early 2000s, through work from international artists and collectives who combined art and online activism in response to the commercialisation of the web. These include The Yes Men, two cunning artist-activists who impersonate the rich and powerful. They have created fake websites and passed themselves off as representatives of Dow, Exxon, Shell, Chevron, Halliburton and the US federal government “to expose corporate crime.” 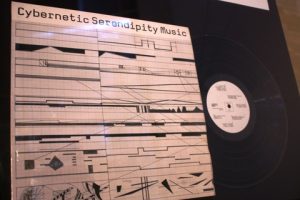 Cyber music of the Sixties.

Seizing on the exposé of doctored photos from Iran aimed at fooling the world that more weapons were being tested than was really the case, a series of paintings by the Berlin resident, Oliver Laric, rages at the cult of copies, rip-offs and remixes. His Versions (Missile Variations) (2010) poses the question as to which images we should trust.

A whole wall of the main gallery is taken up by Jennifer in Paradise, put together by Constant Dullaart of Berlin in 2013. This includes a reference to the first Photoshopped picture, digitised by Kodak in 1987 and supplied with early versions of the programme. The picture is a tropical beach shot of the girlfriend of one of the creators of the software.

Further highlights include photographs from conceptual artist Amalia Ulman’s four-month Instagram project Excellences & Perfections (2014-2015), which examines the influence of social media on attitudes towards the female body.  In the project, “she blurs the distinction between herself and the objects of her scrutiny, ” we learn from the background material. She focuses on “the ubiquity of the mundane and the cute in presentations of identity and taste in social media and beyond.”

Canadian novelist, artist and designer Douglas Coupland in his 2015 work Deep Facepresents four acrylics by Mondrian-like abstract squares reminiscent of pixels and text redactions, obscuring the faces in black and white photos. This is seen as a comment on changes in human existence and beliefs caused by modern technologies.

California-born Petra Cortright has here two digital paintings from 2014, the result of a laborious process in which she downloaded customised digital brushes and then used Photoshop as a canvas, creating hundreds of layers before transferring them on to aluminium boards.

From the Whitechapel survey, the messages are many and varied. Some of the artists have raised questions about the degradation –self-obsession, racism, trolling and so on – which arises from abuses of computer technology, as it does from every branch of industry and science.

In all, though, ingenious and inventive humans are taking a stand, courageous in an age of over-arching artificial – or rather, engineered – intelligence.

To coincide with Electronic Superhighway a series of special projects, displays, commissions and events have been organised.  They include Parallel I–IV, a video installation by German avant-garde film-maker Harun Farocki (1944-1014) which charts the evolution of computer game graphics.

From February 12 until April 17, artist and poet Heather Phillipson is to create an installation for the project galleries, expanding on what she did as Whitechapel Writer in Residence in 2015. Through video, music, sculpture and live and recorded speech, her work “oscillates between conceptual distances and the intimacy of the body.”

Artists’ Film International, the Whitechapel’s annual programme of film, video and animation chosen by partner cultural organisations, is in 2016 based on the theme of ‘technologies.’ Highlights include Scottish artist Rachel Maclean’s Germs (2013), a dark and surreal take on female-targeted advertising. This programme runs until May 29 2016.

Electronic Superhighway (2016-1966) is at the Whitechapel Gallery until May 15 2016. www.whitechapelgallery.org