IMO new infographic – “How the Polar Code protects the environment” 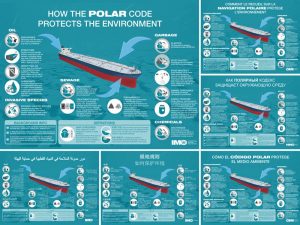 15/02/2016 – A new IMO infographic illustrating “How the Polar Code protects the environment” has been launched today (15 February) in six languages.

It depicts the various environmental requirements and recommendations of the Polar Code relating to oil, sewage, garbage, chemicals and invasive species. Download the infographic in: Arabic,  Chinese,  English, French,  Russian and Spanish. This builds on a previous infographic showing what the polar code means for ship safety, available in six languages here.

The International Code for Ships Operating in Polar Waters (Polar Code) will enter into force on 1 January 2017 and applies to ships operating in Arctic and Antarctic waters. It provides for safe ship operation and protects the environment by addressing the unique risks present in polar waters but not covered by other treaties.

Is this a Market …rebound?