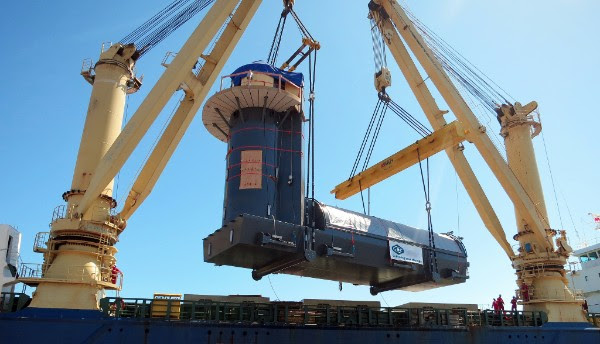 Port Taranaki, New Zealand, 25 February 2016 – The acrylic and steel structure for the world’s biggest underwater restaurant is on its way to the Maldives, thanks to GAC’s project logistics expertise.

The restaurant, complete with its 13m high stairwell, is heading for the brand new resort of Hurawalhi, where it will offer guests a unique underwater dining experience with panoramic views of surrounding marine life, including replanted corals, when it opens in August this year. Food will be prepared on land, then transported to the 24 guests waiting in the dining area further below sea level than any other underwater restaurant in the world. Later, it will be available for wedding ceremonies and as a honeymoon suite.

It took 12 months of detailed planning based on GAC’s proven CAD-assisted lifting and lashing calculations to prepare the structure’s voyage. The first stage involved transporting the 410 tonne load 8 km by road quickly, safely and without incident from the construction company’s yard at New Plymouth in New Zealand to Port Taranaki.

The restaurant was lifted onto a 200 wheel trailer with the help of four trucks – two pulling, one pushing and a fourth on standby for backup. The road trip to the port started at 11pm, due to local traffic regulations for heavy loads, and 12 hours later, it was lifted onto Jumbo Maritime’s vessel, the ‘Fairlane’,  after just half an hour of preparatory procedures and two hours ahead of schedule. Next came the lashings, welding, securing and protection of the load.

The entire operation was planned and overseen by Captain Per Thörnblom, GAC’s Group Project Logistics Manager, who says: “After lengthy and detailed preparations, it’s a big relief to know the restaurant is now safely en route. Depending on stopovers, weather and other factors, we hope that the ‘Fairlane’ will arrive at the brand new resort of Hurawalhi during the first week of March. The precious cargo will then be lifted from the ship and positioned onto 8m and 14m piles. That’s the final stage and one GAC and myself are really looking forward to witnessing.”

The move of the massive load attracted the attention of local media in New Zealand, according to GAC’s man on the ground, Richard Thorpe, who says: “TV news crews turned up to record the lift, resulting in coverage on two national TV channels, which in turn led to requests for radio interviews.”