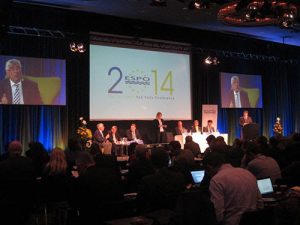 14 March 2016 – For its 2016 Annual Conference, ESPO is taking you to the Irish capital, the city of James Joyce and Samuel Beckett, Dublin.

The 2016 ESPO Conference will look into ways to improve the efficiency of maritime transport and ports, this from different angles.

The first session will focus on the different barriers to the internal market for maritime transport. For decades now, the port and shipping industry have been calling for a “true” internal market for maritime transport, but which steps are needed? What is already there? Who or what are the real barriers? As maritime policy is at the top of the 2017 Commission agenda, the ESPO conference aims at preparing the ground for this important year for the maritime and port sector and at feeding further discussions.

If lifting the barriers of the internal market for maritime transport is essential to enhance the role of maritime transport and convert European ports into seamless gateways and nodes in the supply chain, it is not enough in itself. Growing trade volumes and climate change policies will oblige ports and the whole logistic chain to make better use of the existing capacity in transport. The first way to address this challenge is digitalisation. Is there a digital agenda for ports? Is there a role for policy? The second way to optimise transport and port operations is to explore the world of “big data”. Information is power. But how to use large quantities of data for the port’s benefit? Are we ready to open up the flow of data? How to protect ports against risks of cybercrime? All these questions will be tackled in the second session.

The third session will address the issue of game changers and possible game stoppers when it comes to easing trade. The conference will investigate how TTIP, the trade agreement under negotiation with the US, could possibly benefit ports, on both sides of the Atlantic.  The conference will further zoom into the Chinese “One Belt, One Road” policy and assess how it might affect European Port-hinterland Dynamics. At the eve of the British referendum, an insight will also be provided on the possible impact of a “Brexit” for UK and neighbouring ports. Finally, the conference will discuss how temporary border controls are impacting the European transport and logistics chain.

As usual, the conference will close with a policy debate where EU High-Level policy makers will present their views on the issues discussed during the Conference and enter into a final debate with port authorities. DG MOVE’s Director General Henrik Hololei,  Mark Frequin, representing the Dutch Presidency of the Council and Pat Cox, former President of the European Parliament and TEN-T coordinator for the Scan-Med Corridor are getting prepared for this session. MEP Knut Fleckenstein will address the conference audience at the end of day one.

It is without saying that the interest of the ESPO conferences goes beyond the conference room. As always, the ESPO conference is combining high-level debates with nice networking moments and dinners. This year, our host, the Port of Dublin, will even take the guests to the “Admiral Ball”, a gala black tie evening celebrating the Lord Mayor of Dublin’s honorary Admiralty of Dublin Port. This event also launches the Dublin Port Riverfest.

So do not miss this Conference, book now and join us on 2 and 3 June in Dublin. You won’t regret it!