BDI’s …upwards rally ends with a three points down mark

The BDI closed three points standing at 393 prompting many discussions not just in the Square Mile, but even far beyond! John Faraclas’ mid-week market and geopolitics recapitulation.

The most volatile of all indices, that of the Capers (BCI 2014) lost 14 points (172). The Panamaxes and its respective index the BPI lost another seven – now standing at 474 points; the BSI (Supras) up seven at 439 and lastly the BHSI up two standing at 257. Another Caution as this first interruption might cause other tremors!

The Wets  with mixed feelings; the last published BDTI and BCTI were plus nine and minus two points respectively – now standing at 870 and 503!

All the shipping fraternity are closely watching who will acquire the Baltic Exchange!

Many bankruptcies; many vessels are changing hands under duress, even entire fleets… Expect more spill overs… Yet the best time to enter shipping. A good time also to get rid of pesters, business shipping hooligans and others!

The Shipbuilding industry will be entering soon a new phase!

To entertain you a bit, herebelow is an interesting infographic from VesselsValue; please comment. This infographic looking at the top 5 shipyards ranked by the market value of the newbuilding contacts currently on order. Senior Data Editor, Craig Jallal, commented ‘The current top five shipbuilding groups have seen a significant decline in value of their orderbooks year-on-year since March 2015.  Hyundai HI has suffered the largest decline, down by 12%, but fifth-placed Imabari of Japan, enjoyed a 9% increase in the value of its orderbook.’ 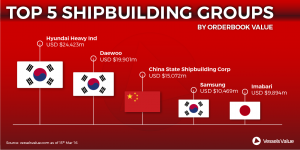