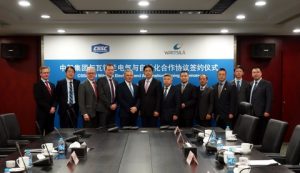 Wärtsilä and CSSC to establish new E&A joint venture in China. Jaakko Eskola, CEO of Wärtsilä and Wu Qiang, President of CSSC in the middle.

The Letter of Intent was signed by Wärtsilä CEO Jaakko Eskola and Mr Wu Qiang, President of CSSC at a ceremony in Shanghai on March 16. The planned activities of the JV will include sales, marketing, engineering and project management for the E&A market. However, following the signing of the Letter of Intent, the full scope of the company’s operations will be further defined. The joint venture company is expected to be operational at the beginning of 2017.

“Wärtsilä has a leading position in supplying E&A systems for high-end and offshore vessel applications. By combining our strengths in this field with the strong market position of CSSC, we can provide Asian owners and yards with the best possible solutions supported by local presence and capabilities, ” says Jaakko Eskola, CEO of Wärtsilä.

“We are delighted to be cooperating yet again with Wärtsilä to serve the marine industry in China. CSSC and Wärtsilä have state-of-the-art technologies and vast experience in E&A systems, and through this joint venture we shall be in a position to provide the best possible offering and service, ” says Mr Wu Qiang, President of CSSC.

Wärtsilä is a global leader in advanced technologies and complete lifecycle solutions for the marine and energy markets. By emphasising sustainable innovation and total efficiency, Wärtsilä maximises the environmental and economic performance of the vessels and power plants of its customers.

In 2015, Wärtsilä’s net sales totalled EUR 5 billion with approximately 18, 800 employees. The company has operations in over 200 locations in more than 70 countries around the world. Wärtsilä is listed on Nasdaq Helsinki.