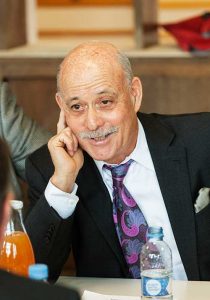 18 March 2016 – On 3 June, American top-economist and influential thinker Jeremy Rifkin will give a key note address at ESPO’s annual conference in Dublin. Besides being the author of The Zero Marginal Cost Society: The Internet of Things, the Collaborative Commons, and the Eclipse of Capitalism and the best-selling author of nineteen other books on the impact of scientific and technological changes on the economy, the workforce, society, and the environment, Rifkin is advisor to the European Union and to heads of state around the world and is the president of the Foundation on Economic Trends in Washington.

“We are delighted to welcome Mr Rifkin at our conference. This year’s ESPO conference will seek an answer to the central question: Are European ports moving fast enough? With such a conference theme, we are extremely lucky to have Mr Rifkin amongst us in Dublin, setting out his vision. It is without saying an additional reason to attend this 13th edition of the ESPO conference”,  says ESPO Secretary General, Isabelle Ryckbost.

The 2016 ESPO Conference will look into ways to improve the efficiency of maritime transport and ports, this from different angles: How to remove the remaining barriers in maritime transport and how to come to a real internal market for maritime transport? How to set the digital agenda for ports? Big data: what is in for European ports? How can ports benefit from new trade agreements? Could Schengen and Brexit be potential game stoppers?

Viewers can register now and ensure their seat in Dublin: www.espo-conference.com

Jeremy Rifkin is the bestselling author of twenty-one books. His books have been translated into more than thirty five languages and are used in universities, corporations and government agencies around the world.

On April 1st, 2014 Mr. Rifkin’s published his latest book,  The Zero Marginal Cost Society: The Internet of Things, the Collaborative Commons, and the Eclipse of Capitalism. In 2011, Jeremy Rifkin published the New York Timesbestseller The Third Industrial Revolution, which captured the attention of the world. Mr. Rifkin’s vision of a sustainable, post carbon economic era has been endorsed by the European Union and the United Nations and embraced by world leaders including Chancellor Angela Merkel of Germany, President François Hollande of France, and Premier Li Keqiang of China. Mr. Rifkin’s other recent titles include,  The Empathic Civilization, The Age of Access,  The End of Work, The European Dream,  The Biotech Century and The Hydrogen Economy.

Jeremy Rifkin has been an advisor for the past 15 years to the European Union. Mr. Rifkin also served as an adviser to President Nicolas Sarkozy of France, Chancellor Angela Merkel of Germany, Prime Minister Jose Socrates of Portugal, Prime Minister Jose Luis Rodriguez Zapatero of Spain, and Prime Minister Janez Janša of Slovenia, during their respective European Council Presidencies, on issues related to the economy, climate change, and energy security. He currently advises the European Commission, the European Parliament, and several EU and Asian heads of state.

Jeremy Rifkin is the President of the TIR Consulting Group LLC, comprised of many of the leading renewable energy companies, electricity transmission companies, construction companies, architectural firms, IT and electronics companies, and transport and logistics companies. His global economic development team is working with cities, regions, and national governments to develop the Internet of Things (IoT) infrastructure for a Collaborative Commons and a Third Industrial Revolution.

Mr. Rifkin is a senior lecturer at the Wharton School’s Executive Education Program at the University of Pennsylvania where he instructs CEOs and senior management on transitioning their business operations into sustainable Third Industrial Revolution economies. From 1995-2010, Mr. Rifkin taught in the Advanced Management Program at Wharton.

Mr. Rifkin’s monthly column on global issues has appeared over the years in many of the world’s leading newspapers and magazines, including The Los Angeles Times in the United States,  The Guardian in the U.K.,  Die Süddeutsche Zeitung and Handelsblatt in Germany,  Le Soir and Knack in Belgium,  L’Espresso in Italy,  El Mundo and El País in Spain,  Kathimerini in Greece,  Informatíon in Denmark,  De Volkskrant in the Netherlands, Hospodárské Noviny in the Czech Republic,  Wort in Luxembourg,  Clarín in Argentina, and Al-Ittihad in the U.A.E.

Mr. Rifkin holds a degree in economics from the Wharton School of the University of Pennsylvania, and a degree in international affairs from the Fletcher School of Law and Diplomacy at Tufts University. Rifkin speaks frequently before government, business, labor and civic forums. He has lectured at hundreds of the world’s leading corporations as well as more than 300 universities in some thirty countries in the past four decades.

Mr. Rifkin is the founder and president of The Foundation on Economic Trends (www.foet.org) in Bethesda, MD. The Foundation examines the economic, environmental, social and cultural impacts of new technologies introduced into the global economy.