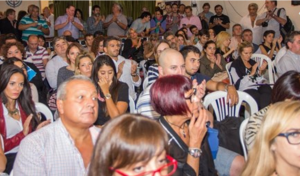 Argentinean cabin crew union the Asociación Argentina de Aeronavegantes (AAA) and the ITF held a regional seminar on 22 March to discuss union responses to the threats posed to aviation workers and their industry in Latin America by increasing liberalisation and deregulation.

30/03/2016
The main focuses of discussion were Europe’s ‘open skies’ policy and the growth in aviation flags of convenience (FOCs). All the ITF’s aviation affiliates in Argentina took part, alongside regional industry leaders.

Liberalisation and deregulation in aviation have led to airlines cutting corners to stay competitive and profitable. One growing practice is airlines owned in one country being ‘flagged out’ by registering themselves and their aircraft abroad to take advantage of cheaper registration fees, low or no taxes and freedom to employ cheap labour. The ITF has long warned that aviation FOCs are likely to deprive workers of decent wages, proper working conditions and legal protection.

Antonio Fritz, ITF Latin America and Caribbean regional secretary, and Emiliano Addisi, ITF Americas regional education co-ordinator, advised aviation unions to learn from the long experience of maritime unions in the fight against flags of aviation in their industry. Juan Pablo Brey, secretary general of Aeronavegantes and vice-president of the ITF’s regional cabin crew committee, set out the impact of open skies on the sector.

Antonio Fritz stated that the aviation industry in Latin America is facing many threats and it is essential that unions share their experiences so that all are aware of the dangers posed by the open skies policy and the growth in flags of convenience. He added that these developments threaten the market, sovereignty and jobs.

Juan Pablo Brey commented that: ”We need to understand and evaluate these risks. The civil aviation industry is crucial for a nation such as Argentina, as without a safe, adequate and regulated industry, regions and cities located thousand of kilometres distant from Buenos Aires would be completely isolated. We believe in competitiveness but with high standards, including safety and fair working conditions”

Other speakers included Rubén Fernández, general secretary of the Union of Senior Staff and Professionals of Commercial Airline Companies (UPSA); Pablo Biro, general secretary of the Association of Airline Pilots (APLA); Alejandro Botana, president of the Union of Airline Pilots (UALA); and Edgardo Llano, secretary general of the Association of Aeronautical Personnel (APA) and president of the Argentinean National Federation of Civil Aviation Unions (FAPA).

ITF civil aviation section secretary Gabriel Mocho applauded the holding of the event, pointing out that the ITF and its affiliates have led the way on these issues. This seminar, he said, was the latest evidence of unions tackling the race to the bottom and setting an example to the rest of the industry.

Read more about the ITF’s campaign against aviation flags of convenience.

Keep up with industry news on the ITF aviation blog.