Gold of Croatia: engaging inland regions of the Republic proclaim their tourism appeal

Croatia is urging tourists to turn their attention to the country’s Danube and eastern inland localities in addition to enjoying the popular and spectacular Adriatic coastline and islands.

Tourism officials of the relatively little-visited eastern territories are extending their welcome with initiatives that have included a presence at the big travel show Destinations in February 2016 at Olympia.

A year earlier at the London exhibition, Rujana Bušić Srpak, director of the tourist board of the county of Vukovar-Srijem with her colleagues shared a stand with counterparts from the Dalmatia region. 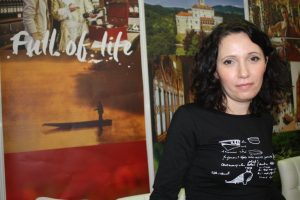 This time, they were marketing Continental Croatia, the term given to Slavonia and its Varaždin county. The region is just over an hour’s drive northeast of Zagreb, and its largest town Vukovar has had to recover from the terrible conflict which caused much bloodshed a quarter of a century ago upon the break-up of Yugoslavia. Nowadays the district enjoys the tranquility that can allow it to extoll its charms for discerning tourists.

Ms Bušić Srpak was among those who put together a brochure about her county, Vukovar-Srijem, which is being promoted as the “Gold of Croatia.” The theme stems not from the precious metal, but from the gold of gastronomy, the golden produce of the vineyards that slope towards the Danube, the golden fields in autumn, and the craft of gold embroidery,

Then there is the  Road of the Golden Thread which links Županja, a small town on the River Sava, and several other locations of interest. According to a local website, the 60 km long Golden Thread Road unites tourism offerings “through tradition, culture, handwork, old crafts, gastronomy, festivals, authentic architecture with the unavoidable barns, grain stores, bread ovens…”

Rivers Vuka and Dunav in Vukovar.

Tourist officials acknowledge that the 1991 Battle of Vukovar – which at the time was the most devastating conflict in Europe since 1945 – is an important part of the city’s history. It was “the tragedy of a nation“ and there is a remembrance trail dubbed Vukovar Nocturne which commemorates “all those who gave their lives for Croatia.”

After a 100-day siege, Vukovar succumbed to Serb miltia. Some 2, 000 defenders of the city and other residents died, 800 people were listed as missing and 31, 000 others displaced. Much of the city was destroyed amid $2.5bn worth of damage, and it was brought under the control of the self-declared Republic of Serbian Krajina. In 1998, Vukovar was returned to Croatia, and rebuilding has made good progress.

The name Vukovar means “town on the Vuka River, “ and it has long been a transport hub. At the confluence of the Vuka and the Danube, and navigable throughout the year, it is the biggest river port in Croatia. It handles general and bulk cargo including cereals, oilseeds, fertilisers, bagged sugar, and containers. The port authority website says that currently the port tranships about 100, 000 tons, although it has capacity in excess of that. From April to October, cruise ships call at two passenger terminals – river cruisers with tourists mainly from the US, Canada, UK and Germany — connecting Vukovar with Budapest and Vienna upstream and Romania downstream.

Among attractive buildings, restored after severe damaged in the recent war, are Eltz Manor, built for a German noble family in the 18th century, other baroque buildings in the centre of the city, the Franciscan monastery with the parish church of St Philip and St James, the water tower, the birthplace of 1939 chemistry Nobel prize winner Lavoslav Ružička, the Orthodox church of St Nicholas, and the palace of Syrmia County. Syrmia was the Latin and Greek term for what is now in the Croatian tongue Srijem. The easternmost part of Syrmia is in the Republic of Serbia. 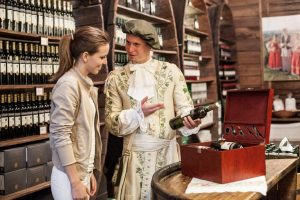 Eltz Manor or Castle, begun in 1749 under Count Anzelmo Kazimir Eltz, grew in size over the years and reached its final appearance at the beginning of 20th century. The city museum of Vukovar has been in the castle since 1968. Donations by Croatian and other European benefactors helped put right wartime damage to enable it to display some of its more than 1, 400 pieces of modern Croatian and European art. “This collection represented the beginning of the cultural restoration of Vukovar, ” say the city fathers.

Most Croatians spend their summers on the Adriatic, but in August many are drawn to Vukovar for its film festival, said to be unique because it is staged on a river. An extensive programme of movies and documentaries is enhanced by events such as concerts and film workshops. 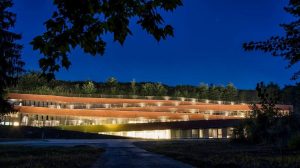 Downriver from Vukovar, towards Ilok and by the Danube, lies Vučedol (which means Wolf’s Valley), which was inhabited as far back as Neolithic times, and is a noted archaeological site. Around 3000 BC a large group of people originated what is known as the Vučedol culture, spreading it to surrounding countries. The Vučedol people were hunters, fishermen and agrarians. They were probably the first to begin cultivating domesticated animals, and the first to use separate plates for each person dining. They traded – remains of trout have been found here, a species that was not present in the Danube at the time. Vučedol ceramics are renowned for their symbolism and beauty especially the most famous piece, known as the Vučedol Dove, which is in fact a representation of a partridge. A ritual vessel, the Vučedol Dove is considered the symbol of Vukovar.

Vučedol is an excursion destination, frequented by anglers and bathers, especially the beach on Orlov Otok (Eagle’s Island). In June 2015, the modern Vučedol Museum of Culture was inaugurated. 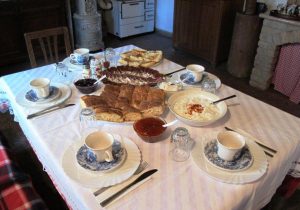 Each January Ilok, the easternmost town in Croatia, celebrates the feast of St Vincent – the saint whose role is protector of vineyards and wineries. The custom is to cut a few vines which are placed beside windows to predict whether the year will be fruitful.

Ilok has a medieval centre with a fort built at the end of the 1300s. Within the fort, the foundations of an even older church have been found. Castle Odescalchi is in easy walking distance, built on a hill above the town centre, offering views of the Danube and the Pannonian Plain. It was most probably built by Nikola Iločki, a king of Bosnia who issued his own currency, and now houses the Museum of Ilok. Beneath the castle lies an old wine cellar, possibly the best known in Croatia. The Ottoman Empire ruled Ilok from the middle of the 16th to the end of the 17th century and left its mark, with visitors able to inspect a turba (the grave of a wealthy Turk) and a hamam (bathhouse).

On the banks of the River Sava at Županja is a restored border patrol house from the beginning of the 19th century. This area used to be the frontier between Austria and Turkey, and blockhouses called čardaks were positioned every 2 km. The one in Županja is the only remaining military border architecture of its era in the country. After the border patrols were no longer needed, the čardak was transformed by English businessmen into a clubhouse, and it was later a residential building. In 1964 it became part of the museum which runs it today.

Just as intriguing is Županja’s “football monument.” When the British industrialists who arrived at the end of the 19th century built a tannin factory, they taught the local youngsters their sports, including tennis, but mainly soccer. In 1979, a small leather ball which was at the time being used by a craftsman as a receptacle for nails and other odds and ends was sent for analysis, and was found to date from a century earlier. The following year, a sculpted monument to mark this centenary was unveiled in the main square of Županja, and in 2015 a new monument to “the first football in Croatia” was unveiled by the president of the Croatian Football Federation.