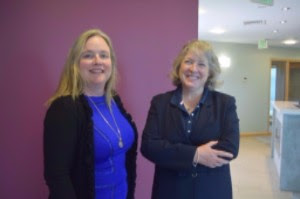 Hamilton, Bermuda, April 7, 2016—The Bermuda Business Development Agency’s Board of Directors has announced the appointment of a new Chair, effective April 1.

Caroline Foulger, who has headed the BDA Board since its inception in April 2013, is stepping down as Chair, however, she will remain on the Board for another term as chair of its Finance and Audit Committee. Stepping up as new Chair is Kiernan Bell, who has served as a Director on the BDA Board during the agency’s first three years.

Economic Development Minister Dr Grant Gibbons, thanked Foulger for her dedicated service to the BDA, and welcomed Bell to her new role as incoming Chair for the agency.

“On behalf of the government and the Ministry of Economic Development, I congratulate Caroline on her tireless service to the Board and BDA, ” he said. “Her input has helped shape the BDA’s mission and strategy from Day One, and that has added great value to what the BDA has been able to accomplish for the island.

“Kiernan is an excellent appointment who, like Caroline, brings a wealth of knowledge and market experience to the role of BDA Chair. I look forward to working with her as she continues the good work to help grow Bermuda’s GDP and create a positive environment for job creation in our jurisdiction.”

Foulger said she was grateful for the opportunity to help guide the new agency from start-up through its business-development successes across all industry sectors.

“It has been a pleasure and privilege to serve as the first Chair of BDA, ” said Foulger, a former partner at PwC Bermuda who also sits on the boards of Hiscox and Butterfield Bank, among others. “The agency was formed to bring together international business-development activities in Bermuda—which had formerly been carried out by several different groups—and to sustain and create on-island jobs. Three years on, we are seeing the successful results of that strategy.”

Foulger noted the BDA’s team was forging ahead on innovative business-development initiatives, and, under its umbrella, much of the island’s IB sector had become a unified “Team Bermuda” advocating for the jurisdiction. “We have received strong support from the current government, the former government, and the private sector in our activities, ” she said. “Amid merger activity in the insurance sector, fierce competition from other jurisdictions, and regular global assaults on offshore financial centres, BDA has contributed to the formation of new companies, improved branding of the island, and helped promote industry growth that has led to the creation of new jobs.

“There remains much to do, ” she added, “however, I am more than confident that Kiernan Bell as our new Chair is the right leader to take BDA forward, with the support of CEO Ross Webber and the whole BDA team. I look forward to my final year on the Board and to supporting Kiernan in her role.”

Bell is the immediate past managing partner of Appleby Bermuda, and heads the Appleby Bermuda Dispute Resolution Team. She is a former president of the Bermuda Bar Council and also serves as a director of HSBC Bermuda.

“I am very grateful to Caroline for her leadership over the past three years and delighted that she will continue to serve on the Board and as chair of the Finance and Audit Committee, ” said Bell. “For my part, I am looking forward to continuing to work with my fellow Board members, the BDA team, and stakeholders—all of whom are collaborating towards a common goal.

“Bermuda is a pre-eminent offshore jurisdiction with an unparalleled platform to offer innovative solutions to the global marketplace during an era that poses both great challenges and opportunities, ” Bell noted. “I look forward to doing my part to ensure the jurisdiction maintains and enhances its reputation for being innovative, well-regulated and relevant, while focussing on services and sectors which create job opportunities for Bermudians.”

Rob Flello MP cruises to end of Fellowship with Stagecoach