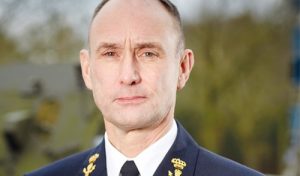 The 13th International Naval Engineering Conference and Exhibition (INEC 2016), with its theme ‘Engineering the Triple A Navy: Active, Adaptive, Affordable’, gets off to a flying start on Tuesday 26 April, with keynote addresses delivered by a trio of international naval luminaries, from the Netherlands, the UK and the USA; and by INEC’s Principal Sponsor.

“It is a great honour to welcome these four inspiring speakers to INEC 2016, ” says Cdr Matt Bolton RN, Ministry of Defence, UK and Chairman of the INEC Technical Advisory Committee. “I know all our delegates will be interested to hear their views on the ‘Triple As’ within our theme. INEC provides a unique and uncompromising forum for professional engineers and technologists from across the world’s navies, defence industries and academic establishments to share the very latest thinking and developments in warship and submarine design and operation.”

INEC is one of the Institute of Marine Engineering, Science and Technology’s (IMarEST) learned society events and is CPD approved by the Institute. The three-day conference features more than 80 authors from Australia, Bahrain, Canada, France, Germany, Korea, the Netherlands, Singapore, Sweden, UK and USA delivering peer-reviewed technical papers.

The full programme is online at www.inec.org.uk.

Down to detail
After the keynote addresses in the opening plenary, presentations will be delivered on ‘Humanitarian operations – not a grey area?’; ‘Australian Landing Helicopter Dock; a tale of successful design and construction spanning two hemispheres’; and ‘Using airwake simulation to inform flight trials for the Queen Elizabeth Class Carrier’. The conference then breaks into parallel sessions devoted to the ‘Triple A’ themes.

The conference ends with a second plenary session in which topics being addressed are ‘Maintenance channel’; ‘The ‘cyber enabled ship’ – what does it mean for the operators and regulators’; and Richard Vie and Rear Admiral Nigel Guild speaking on: ‘Naval and commercial ship procurement – a comparison and consideration of the issues raised’.  Rear Admiral Henry Parker, Director Ship Acquisition, UK Ministry of Defence will deliver the closing summary.

The presentation of the Sir Donald Gosling Award will conclude the 3-day event.  The award is designed to recognise young authors aged 35 and under and this year 23 presentations are competing for the Award which consists of three prizes – first prize £5, 000; second prize £2, 500; and third prize £1, 500. As Sir Robert, one of INEC’s Patrons explains: “Since INEC 2008, Sir Donald Gosling’s generosity in funding his Award, has encouraged young engineers to present their ideas and innovations to a worldwide audience.” During a visit to INEC 2016 Her Royal Highness The Princess Royal will meet all the Sir Donald Gosling Award candidates.

Major sponsors
With its title ‘Engineering the Triple A Navy: Active, Adaptive, Affordable’ INEC 2016 is sponsored by the Babcock International Group, BMT Defence Services, Rolls-Royce, QinetiQ, GE’s Marine Solutions and BAE Systems; and supported by the US Office of Naval Research Global; KIVI Engineering Society; UKNEST; the IET; and SUT.

Further information
Further information on all aspects of INEC 2016 including the technical programme, sponsorship and the exhibition is atwww.inec.org.uk and from inec@figsevents.co.uk.  Online registration will be available until the start of the conference and all non-IMarEST member participants will be made complimentary IMarEST Affiliate Members for one calendar year, giving instant access to Institute services.

Vice Admiral (E) Arie Jan de Waard, Director, Defence Materiel Organisation, the Netherlands (photograph attached)
After completing his naval officers’ training at the Royal Naval College (KIM), Arie Jan de Waard became an officer in 1985.  During his career, he fulfilled several positions in the Royal Netherlands Navy; his last operational assignment was Marine Engineering Officer on board HNMS Van Nes.  He studied at the University of Twente where he obtained his engineering degree in May 1990.  His graduation assignment concerned the evaluation of a computerised equipment management system at the national shipyard (Rijkswerf) in Den Helder.  In January 1999 he obtained his PhD degree at the University of Twente with a dissertation entitled Re-engineering non-flow large scale maintenance organisations.  Since January 2008, he has held the position of Flag Officer Marine Engineering.  He was appointed Director Defence Materiel Organisation and promoted to Vice Admiral in December 2015.

Rear Admiral Richard Stokes, Assistant Chief of Naval Staff (Support), UK
Assistant Chief of Naval Staff (Support) is the 2* Commander for HM Naval Bases Clyde, Devonport and Portsmouth, and the Oil Fuel Depots, and is responsible for providing Engineering Support, Infrastructure and Logistics policy, advice and assurance to the Navy. Based at Navy Headquarters on Whale Island, Portsmouth, Rear Admiral Stokes took up the appointment in April 2015.

Richard Stokes joined the Royal Navy in 1981 and graduated in engineering from the Royal Naval Engineering College, Manadon.  He trained as a Submarine Weapon Engineer Officer and had a wide range of submarine, staff and command jobs.  Promoted to Captain in 2005, he served in the MOD Equipment Planning directorate; moving to Navy Command in 2008 to manage the careers of the 13, 000 officers and ratings in the Royal Navy’s engineering branch, before moving on in 2011 to study at the Royal College of Defence Studies.

Promoted to Commodore in 2011, he spent 10 months as the Programme Director for Royal Navy Defence Reform Implementation – the programme to reduce the Navy’s Non-Front Line manning by 20%, before returning to the MOD in 2012 to take up the post of Head of Nuclear Capabilities. Here he was responsible for planning the future submarine programme, with particular responsibility for delivering the Astute class into Service; steering the Successor SSBN towards its Main Gate investment decision in Spring 2016; and for initiating pre-concept work on the replacement for the Astute Class.

Mr Frank Kelley, Deputy Assistant Secretary of the Navy for Unmanned Systems, US Navy, USA
Frank Kelley graduated from the University of Notre Dame in 1983 with a degree in Aerospace Engineering. Upon completion of Officer Candidate School (OCS), he was commissioned a Second Lieutenant in the United States Marine Corps and underwent further training in electronic warfare; he continued to hold several positions in this field through his career, followed by assignments in the Marine Aircraft Group 49, the Pentagon and the Command and Staff College. In August 2007 Brigadier General Kelley was assigned to the position of Marine Corps Systems Command (MCSC) Program Manager for Training Systems and two years later he was reassigned as MCSC’s Chief of Staff and became Commander in July 2010. He retired from the US Marine Corps as Brigadier General and is now Deputy Assistant Secretary of the US Navy for Unmanned Systems.

Mr Simon Knight, Naval Engineering Director, Babcock International Group, UK
Simon Knight studied at Southampton University and University College London where he obtained his Master’s degree in 1991.  Initially employed by the UK MOD, he worked in the Future Ship Projects Group focusing on nascent aircraft carrier studies.  Upon leaving the MOD he became Project Naval Architect on the Batch 2 Trafalgar Class submarine project (subsequently the ASTUTE class), employed by BMT.  In 1999 he took the Lead Platform Designer role for the THALES Team’s successful design for the Queen Elizabeth Class aircraft carriers and became the Platform Design Director in the subsequent Aircraft Carrier Alliance formed to manage the programme.  In 2009 he was seconded back into the UK MOD to head up the Naval Design Partnership, and led various concept studies to help inform the shape of the future fleet.  He joined Babcock in 2013 where as Naval Engineering Director, he is responsible for engineering design information related to the support of RN ships and submarines, as well as Babcock’s new build programmes.

About the closing summary speaker
Rear Admiral Henry Parker, Director Ship Acquisition, Ministry of Defence, UK
Rear Admiral Henry Parker assumed the role of Director Ship Acquisition in July 2014 having previously overseen the delivery of the UK Carrier Strike programme since February 2013 as Director (Carrier Strike). He joined the Royal Navy in 1983 and subsequently studied Engineering at Cambridge University before specialising as a Submarine Weapon Engineering Officer. His seagoing complement billets include the submarines HMS Spartan and HMS Upholder as well as the Aircraft Carrier, HMS Invincible. He has also served in a further Frigate and Submarine for training but, as is normal for his branch, his core expertise is in acquisition. In this role, he has completed 5 assignments connected with the Astute Attack Submarine programme including 2 years on secondment to the Prime Contractor (2003-2005) and, most recently, as MOD Project Director where he was responsible for the delivery of the Class to operational service. Within submarines, he has also been the Project Chief Engineer for the Successor SSBN programme for the formative first four years of the project; covering early concept work through to Initial Gate Approval and mobilisation into Full Design. More widely, he has been employed as the Assistant Naval Attaché Washington DC (2005-2007) as well as in the Outer Offices of the 2* Chief Executive of the Ships Support Agency (1996-1998) and the 4* Chief of Defence Staff (2001-2003).

Damen:Modular dredger gets to work in the Andes