Evangelos Marinakis on the BBC: “We Keep on Dreaming of a better future for everyone!” 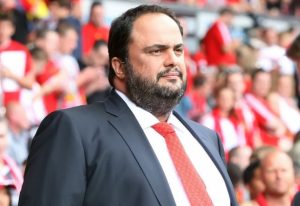 Evangelos Marinakis, the President of Olympiacos F.C recently talked to the BBC about the Club’s admirable initiative to provide assistance to the refugees stranded at the Port of Piraeus.

Evangelos Marinakis explained, in a discussion with the BBC World Service reporter, Mr. Steve Crossman, that he decided to get involved in helping the refugees who are currently stranded at the Port of Piraeus, because “Olympiacos is something more than just a football club. The recent events in the Middle East have forced people to leave their homes and seek safety for them and their families. Some of these people have found a temporary shelter at Piraeus port. The Piraeus region is home to Olympiacos. I felt it was our duty to provide for those people who cannot provide for themselves. We are giving whatever we are capable of. Seeing children and families suffering, is heartbreaking. It cannot leave you indifferent or passive”.

Evangelos Marinakis, as President of Olympiacos F.C., took the initiative, on March the 4th,  “to provide the refugees in the port of Piraeus with meals as well as clothing which is especially important during this cold period.” As he stated, “we serve on a daily basis thousands of meals which are prepared at the restaurant of Georgios Karaiskakis stadium (our home grounds). In addition we give away thousands of items of clothing like jackets, sweaters, trousers, hats, socks, footballs and toys for the children who also need a lot of emotional and psychological support. Up until now Olympiacos has offered over 60, 000 meals and more than 110, 000 items of clothing!”

Evangelos Marinakis also noted that “two captains, and two of our best and most popular players, Roberto and ‘Chori’ Dominguez were present in the port to help distribute food and clothes. The captains also played football with the children, hoping to put smiles on their faces again, and to forget, even temporarily, the struggles they are facing. Yesterday two more of our players Hernani and Seba also visited the refugees at the port and distributed over 3, 000 meals and over 2, 000 items of clothing. At this point I would like to stress how proud and thankful I am of all the staff, administration, players and volunteers of Olympiacos who are supporting this great effort, being there every day under difficult conditions and who despite our own domestic struggles as a nation, continue to help those in need without any discrimination.”

Evangelos Marinakis, for the past 6 years under his Presidency has been helping thousands of Greek people from different parts of our country, who have been seriously affected by the financial crisis in Greece and are really struggling. Olympiacos, under his guidance, offers them food, clothing, medical assistance, makes regular donations and visits to schools, hospitals and to many other institutions and privateers who ask for help. Olympiacos is also the largest donor to UNICEF’s 100% Campaign in support of global immunization programs and since 2013 has helped protect over one million babies!

In fact when someone doesn’t be aware of after that its up to
other viewers that they will help, so here it takes place.