Royal Academy to roll out Abstract Expressionism exhibition in September 2016

Royal Academy to roll out Abstract Expressionism exhibition in September 2016

After World War II, the US was quick to make use of the enormous economic and political power it now enjoyed – and in parallel, the nation’s rebellious artists were beginning to assert their ascendancy in their sphere. The cultural pendulum swung decisively from Paris to New York, where Abstract Expressionism, “the most important movement in our modern time” became firmly established.

The quoted phrase is that of Edith Devaney, contemporary curator at the Royal Academy of Arts, speaking as the London institution unveiled details of its huge exhibition Abstract Expressionism, which will run from September 24 2016 to January 2 2017. 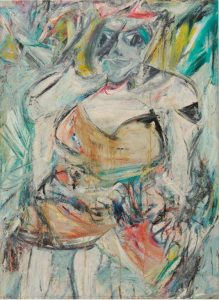 The show is billed as “the first major exhibition of Abstract Expressionism to be held in the UK in almost six decades.”

In his assessment, Christopher Le Brun, president of the Royal Academy, went further.  “I think it will be the greatest Abstract Expressionism exhibition ever, ” he declared. He is an unashamed partisan: “I am passionate about this movement, ” he said. “There is something about this movement which still has momentum.”

Despite its kicking over the traces and its affinity to mores such as Afro-American jazz, the unbounded genre was seen amid a climate of Cold War hysteria as an American standard bearer of “freedom.”

The movement, best known for its large, splashy oil paintings, put the Big Apple centre stage, usurping the French capital as the art superpower. It usually exuded a brash confidence in its wrenching away from conventions by its unrestrained use of colour and scale.

Why has this group as a whole not previously been surveyed so thoroughly? “The subject is so daunting and complex, it is almost too formidable to have been done, ” said independent art historian David Anfam, the co-curator.

The Eye is the First Circle, by Lee Krasner.

The show’s 150 paintings, sculptures and photographs from public and private collections across the world if put on the auction block would together yield an enormous sum, given that the average auction price for top-notch work of this kind is $75m – so it is just as well that the Royal Academy is fully insured through the UK government indemnity scheme.

The school of largely non-representative art took hold in the 1940s, and by 1956 major institutions were eager to acquire more and more works from artists of the ilk of Jackson Pollock, Mark Rothko and Willem de Kooning who were sometimes characterised as “the bad boys” because of their turbulent personal lives, but who had their art rather than their bank balance in focus. It tended to be a boys’ club, but “most were no more or less sexist than anyone else of that period, ” said Dr Anfam.

Water of the Flowery Mill, by Arshile Gorky.

Hitherto, Abstract Expressionism has hitherto been classified as either “action painting” – a dynamic act of creation – or as “colour field painting” with its expanses of wilful colour.

Dr Anfam said that much of the output was known for its epic scale, but many of the artists were “masters of scale both very big and very small.”

In this context, given the gargantuan size of some of the works, the huge agapanthus triptych by Monet, which has been on display at the Royal Academy as part of its Painting the Modern Garden exhibition, is seen by Mr Le Brun “as the beginning of modern painting.”

The abstract expressionists wanted to extend their canvases to have an impact on the viewer as a physical being. The wealthy art collector Peggy Guggenheim, whose father perished with the Titanic, commissioned a mural by Pollock in 1943, “an amazing statement of colour” said Dr Anfam, in the light of the fact that Pollock is not usually associated with that approach to colour. The mural, 243 cm by 63 cm, was hung in the hallway of Mrs Guggenheim’s town house, and within two years of it being installed there, “everyone” in the New York art world had seen it. 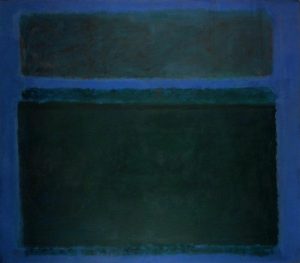 Pollock’s monumental Mural,  1943 will be on loan from University of Iowa Museum of Art, Iowa, alongside Blue Poles, what Dr Anfam called Pollock’s “barnstorming swan song.” The stick figures of the earlier mural were echoed in Blue Poles, which is enamel and aluminium paint with glass on canvas, 212 cm by 489 cm, and is held by the National Gallery of Australia. Their juxtaposition, in London, is unlikely to ever be repeated.

The Royal Academy is devoting its main galleries to the show.

The biggest gallery, Gallery III, will house a mini-retrospective of Pollock’s work, including the works mentioned above. Pollock (who was a heavy drinker and who died aged 44 in 1956 in a car accident) is renowned for pouring or dripping paint onto large canvases on the floor, the process amounting to a kind of performance. Pollock’s wife Lee Krasner will be represented by The Eye is the First Circle, 1960, courtesy of Robert Miller Gallery, New York.

Gallery I will begin with two sets of portraits, one an oil on canvas by Rothko with eyes blanked out from 1936, and Male and Female, 1942, by Pollock where the distortion of the human form stems from Surrealist and Cubism art forms. It portrays a man and woman in an extreme abstract form.

Gallery II will feature Arshile Gorky (1904-48) who committed suicide after a car crash in 1948. Gorky assimilated the extensive colours of Wassily Kandinsky, a pioneer of modern abstract art. Gorky said: “Abstraction allows man to see with his mind what he cannot physically see with his eyes.” Born in Armenia, Gorky was a survivor of what his compatriots and others describe as the genocide which killed millions. His Water of the Flowery Mill, 1944 (The Metropolitan Museum of Art, New York) will be on show.

Switching to west coast US, Gallery IV will examine “gesture as colour” considering artists including Janet Sobel who had an impact on Pollock, although at least one sexist critic of the time went to some lengths to downplay that. Others from the West will be Sam Francis, Mark Tobey and Minor White.

Gallery V will have 13 works by de Kooning (1904-1997) such as scenes of New York by night and his 1948 enamel on board Dark Pond. An entire wall will be taken up by his depictions of women from a series begun in 1950 after meeting his future wife. These will include Woman II, 1952 from the Museum of Modern Art, New York.

The Royal Academy’s octagonal central hall will have seven canvases by Rothko, deliberately hung to respect his wish that they loom over the spectator.

Gallery VII will feature ‘colour field’ specialist Barnett Newman (1905-1970), and Ad Reinhardt 1913-1967) known for his Black Paintings in which a Greek cross can just be made out. Gallery VIII will be titled Darkness Visible, a phrase from Paradise Lost. In Plato’s Cave, an acrylic by Robert Motherwell (1915-1991) will feature.

Abstract Expressionism encompassed a much wider range of media than is often realised, and Gallery IX will have sculpture and photography exhibits. There are large-scale outdoor sculptures and public art, and in his photography Aaron Siskind sought to capture the same kind of energy and movement that Pollock sought through action painting. Pollock has famously been recorded at work by among others photographer Hans Namuth.

Six of the many women artists at the forefront of the movement will be honoured, including Helen Frankenthaler, Louise Nevelson and Joan Mitchell (1925-1992) “a fantastic painter, ” said Dr Anfam.

Dr Anfam said: “Abstract Expressionism … will bring together some of the most iconic works from around the world in a display that is unlikely to be repeated in our lifetime.”

BNP Paribas said it was proud to sponsor the exhibition, “a once in a generation opportunity to explore one of the most influential movements in art history.”

Abstract Expressionism will be at the Royal Academy from September 24 2016 to January 2 2017, and the Guggenheim Museum, Bilbao, from February 3 to June 4 2017.