France’s Olympic hopefuls will be aiming to sign off before the Rio 2016 Olympic Games with a bang on their home waters at Sailing World Cup Hyères.

Billy Besson and Marie Riou in the Nacra 17 and the RS:X racers, Pierre Le Coq and Charline Picon, have enjoyed significant success in the Rio 2016 quadrennial and are viewed as firm favourites at Rio 2016.

Besson and Riou have emerged as the masters of the Nacra 17, sailing faster than any of their rivals culminating in four consecutive world championships.

No sailor had achieved the fabulous four in an Olympic quad in advance of Rio 2016 and much like waiting for buses, two came at the same time as Peter Burling and Blair Tuke (NZL) achieved their fourth in the 49er.

But unlike the Kiwis, the French do have some weaknesses in their armour.

They were beaten to second by Jason Waterhouse and Lisa Darmanin (AUS) on Olympic waters at the 2015 Olympic test event and recently finished all the way down in 16th at Sailing World Cup Miami. Unlike the superheroes that are Burling and Tuke, it proved that Besson and Riou are human after all.

When it comes to racing in Hyères, Besson and Riou have enjoyed great success. They finished second in 2013 and 2014 before winning it for the first time in 2015. Their performances indicate that their Olympic selection is all but confirmed and Hyères in 2016 will give them the opportunity to showcase their credentials in advance of the Olympic Sailing Competition. 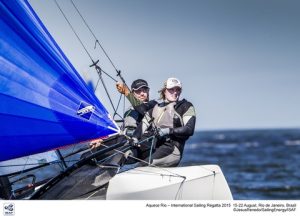 Two sailors confirmed by their National Olympic Committee for Rio are Australia’s Waterhouse and Darmanin. The cousins were outstanding at the 2015 test event, taking gold to confirm their Olympic status. Without the pressure of internal qualification they have been able to relax and test different set ups on their Nacra 17.

Several weeks has passed since their last outing, the Nacra 17 World Championships, and Hyères will enable them to test themselves against Besson and Riou and the world class fleet that is assembling.

In the RS:X, France’s Charline Picon has picked up two Olympic test event gold medals as well as 2014 World and European titles. As the only sailor to claim an RS:X Women’s gold medal at the two test events Picon is a resounding favourite for gold. However, what she lacks in the current quadrennial is gold at her home world cup.

She came close in 2013 with bronze and even closer in 2015 with silver but the golden finish is missing. However, it’s no foregone conclusion that a further update is coming. World class opposition including World #1 and 2015 Hyères gold medallist Lilian de Geus (NED), 2016 world champion Malgorzata Bialecka (POL) and London 2012 gold medallist Marina Alabau (ESP) will all be on the start line.

Much like Picon, compatriot Pierre Le Coq in the Men’s RS:X has tasted success on Olympic waters. Two podium finishes, second in 2014 and third in 2015, at the Olympic test events alongside a world championship gold in 2015 position him as a contender for an Olympic medal.

The young Frenchman picked up gold in the Men’s RS:X in an elite fleet in Hyères last year and will be joined by a stellar cast of RS:X racers once again in Hyères.  2016 world champion Piotr Myszka (POL) and seven of the world’s top ten will all be in attendance.

The Laser and Laser Radial will be made up of many leading contenders. 2015 winners Tom Burton (AUS) and Evi Van Acker (BEL) will spearhead their respective fleets. In the Finn, London 2012 bronze medallist Jonathan Lobert (FRA) will make his first regatta appearance of 2016. He signed off 2015 with silver at the Finn Gold Cup in Takapuna, New Zealand and he will be joined by London 2012 silver medallist Jonas Hogh Christensen (DEN) and Princesa Sofia winner Josh Junior (NZL).

Sailing World Cup
The Sailing World Cup is a World-class, annual series of Olympic sailing for elite and professional sailors. It is open to the sailing classes chosen for the 2016 Olympic and Paralympic Sailing Competitions in Rio de Janeiro, Brazil. The series moves around the world to be as inclusive as possible to the top 40 boats in each class. Over 2, 000 of the World’s leading sailors, representing over 75 nations compete in the Sailing World Cup which offers a definitive guide to the best-of-the-best in the Olympic sailing world.

World Sailing is made up of 141 Member National Authorities (MNAs), who are its principal members, and responsible for the decision making process that governs the sailing world.

There are currently more than 100 World Sailing classes, ranging from the small dinghy classes for young people up to 60 foot ocean racers.

For more information about World Sailing please go to isaf.com or contactmarketing@isaf.com