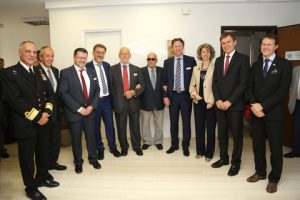 On Wednesday 20 April, HELMEPA presented the Full Mission Bridge Simulator, which was kindly donated by its Associate Member DNV GL.

At the event present were HELMEPA’s Founding Members Dr. M. Los and Captain P. Tsakos and the Honorary Members Messrs P. Ioannidis and S. Mavrikis. The Union of Greek Shipowners was represented by Mr. P. Laskaridis, the Union of Masters and Mates of the Greek Merchant Marine by its President Mr. E. Tsikalakis while from the Hellenic Navy, Rear Admiral A. Diakopoulos, Commander of Naval Training Command and members of his staff attended the presentation.

Associate Member VSTEP, the makers of the Simulator, was represented by Mr. Mark Van der Meij and colleagues from Greece while also present were member companies’ executives, maritime press as well as the Chairperson of HELMEPA’s Training Committee Ms M. Christopoulou together with Committee members.

From the Association’s Board of Directors present were the Chairman Dr. J. Coustas, the Special Secretary Ms I. Daifas, the Deputy Treasurer Mr. M. Dalacouras and the Members Ms Ek. Los and Messrs D. Manos, A. Pittas and P. Zachariadis.

Welcoming the guests, the Chairman Dr. J. Coustas, noted that the Bridge Simulator enhances HELMEPA’s contribution to the voluntary training of seafarers towards a better environment and the further improvement of safety at sea, as was its Founders’ dream. Speaking on the long standing relation between HELMEPA and DNV GL, he thanked the Organization and its former President Dr. Henrik O. Madsen for the kind donation, stressing that “with such supporters, HELMEPA strengthens its presence in shipping and the wider society.”

Mr. Ørbeck-Nilssen expressed his pleasure that DNV GL has the opportunity through this donation to support HELMEPA’s refresher training work, which is appreciated within the maritime community and wished every success noting that “DNV GL will continue contributing to this voluntary shipping effort.”

Expressing all HELMEPA Members’ appreciation, the Chairman presented commemorative emblems to Mr. Ørbeck-Nilssen for DNV GL and to Mr. Svensen for Dr. Madsen, for his significant support to the proactive efforts of the Association.

Further information on the Simulator Seminars can be found at the following link http://www.helmepa.gr/gr/simulator.php.