Working towards oceans beyond piracy 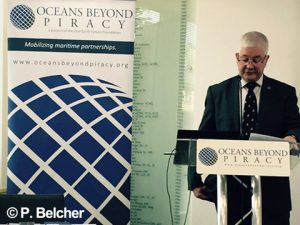 IMO’s work to address maritime piracy has been highlighted at the launch of The Oceans Beyond Piracy (OBP) report on “The State of Maritime Piracy 2015 – Assessing the Economic and Human Cost of Piracy” in London, United Kingdom (3 May). In his opening address, IMO’s Chris Trelawny set out the Organization’s various anti-piracy initiatives. These include IMO’s GISIS database of reports on acts of piracy and armed robbery against ships; development of a comprehensive range of guidance on prevention, repression and investigation of piracy and armed robbery, including guidance on the carriage of armed security personnel; and successful regional initiatives.

Mr. Trelawny emphasized that IMO’s long term strategy is focussed on helping its Member States to create conditions for increased employment, prosperity and stability through enhancing the maritime sector and sustainable blue economy, underpinned by good maritime security. He went on to welcome the report, saying that it will not only address the human and economic costs attributable to piracy and armed robbery in the Gulf of Guinea, the western Indian Ocean, and Southeast Asia, but it will also underscore the plight of seafarers who continue to be at risk of violent attacks at sea.

Find out more about IMO’s work on maritime security and piracy here.

Forum for Jamaica Growers and Exporters…