Call of the wild…

She follows in a fine tradition of artists inspired by the British landscape, with her exuberant interpretations of flora and fauna. Her artistic path – sometimes trodden in the most wild and windy weather – is a far cry from her early upbringing. Luna lived near London and her father has been involved in the City variously in shipping and in metal trading. She has pursued quite a different career, but espoused one salient feature from his paternal example: that of adhering to the highest ethical standards.

“Although I was not influenced artistically by my father’s years in the shipping industry, I have learnt from him the importance of behaving decently in business with others, ” said Luna. “When he ran his own company I absorbed the principle of paying people well and of developing loyalty.”

Luna makes distinctively original, hand-pressed linocut and vinyl prints which are exhibited in galleries in the South West and beyond, and sold internationally. Art enthusiasts in Greater London have been impressed by examples of her work included in the exhibition at Orleans House, Twickenham, celebrating the great landscape gardener Capability Brown.

One of her latest prints, in gorgeously fresh colours, records the best of the warm spring of 2016: the blue skies and fresh green buds on trees by the moor.

Blowing in the wind.

Luna was born in Redhill, Surrey, but her parents moved early in her life to Kent where her paternal grandparents farmed, before returning to Redhill. “I always felt more connected to the countryside in Kent than the urban life of Surrey; many of my summers were spent on my grandparents’ farm.

“My brother and I often stayed with our grandparents on my mother’s side in Purley where they had a big garden with ponds. My grandmother loved the wildlife in her garden and fed the foxes and the starlings which she said looked as though they were sequined. From around 10 years old I began to draw and paint the birds that she loved.

“On my mother’s side I had two aunts who were wonderful artists. One was a member of the Royal Academy and her watercolours hung on the walls of my grandparents’ house. The other was an embroiderer and milliner; I am lucky enough to own one of her embroideries, a large piece with a leaping frog and a star-lit deer, a magical piece that has been influential in my style.” 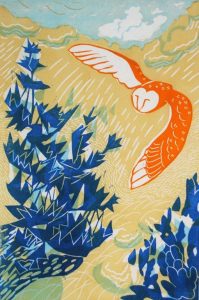 The owl and the holly tree.

Luna continued: “My father entered the shipping industry at the age of 18, working for Port Line, a part of Cunard shipping that transported chilled fruit. After three years he moved to the shipping department of the British Metal Corporation. Following that, he was invited to join the trading department of that business. He continues to this day with that speciality in other companies.”  Becoming aware of the values he held dear, said Luna, “I saw how friendships and connections made in business can last a lifetime. My father still travels to London to meet old friends at the annual London Metal Exchange dinner.”

Luna studied at Falmouth School of Art, graduating with a BA degree in Fine Art. Falmouth has a great artistic heritage (JMW Turner, John Singer Sargent, James McNeill Whistler, 1930s Surrealists, and contemporary artists, many of their subjects maritime). In contrast, said Luna, “My inspiration has always been the inland rural landscape and the ‘interior landscape’. At the age of 15, I painted my first big landscape in oils, of the chalk downs of Surrey. From the start I sought to convey what I saw as the spirit of the land and looked to artists such as Samuel Palmer, David Jones, Paul Nash and Cecil Collins. At Falmouth I followed the paths from the sea inland to the small woods that had grown up protected from the salty air in the valleys.”

Plymouth-born Cecil Collins (1908-1989) who painted visionary subjects “has had a big influence on my creative thinking. Whilst studying art I travelled on two occasions especially to see Collins’s work. The first time I wrote to the Tate and asked if I might view The Angel of the Flowing Light; as I sat in the dark vaults with this huge, magnificent painting I felt the silence and connection that the angel conveyed. A year later I went to a gallery on Cork Street and asked if I might see Collins’s work in their stores. The gallery got out their Collins gouache paintings which were smaller scale, of mysterious star-filled landscapes; I sat for two hours gazing at them.” 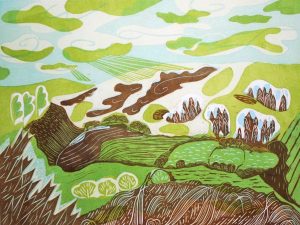 Among other admired artists are the post-Impressionist Paul Cézanne “and in particular, his watercolour landscapes have been a big influence. I saw his watercolours at the Tate Britain many years ago and saw how he was striving to capture the air, the atmosphere, the physicality of the space that surrounds the trees, the hills, the rocks. He uses a narrow colour palette, allowing the blue of the sky to live in the mid- and foreground, conveying that the air is around us and not just stuck up in the sky. I know that Cézanne took risks through his understanding of how to depict the landscape, and the results are very inspiring.”

Luna explained what she finds fascinating about the climate and seasons of Exmoor.

“I live with my husband and son in our converted railway station house. My studio in the loft has a view of Exmoor in the distance. This strip of Exmoor has golden grass, and balances on the top of the farmed fields that lead to my door. In just 10 minutes I can drive to the moor and walk for miles in all directions.

“I love the wildness of Exmoor. I love it that I am allowed to walk and not feel that I am on private land; that I can explore freely day or night. Our moorlands and parks are magnificent, the very best of Britain. Our freedom to roam, to be ourselves, to be nurtured by the landscape, I cherish.

“Emily Brontë’s Wuthering Heights set on Dartmoor connected deeply with me when I read it. I understand how you can build a relationship with a piece of land just as you can with a person. The colours of the moor are subtle, the wind constantly ripples the seed-heads of the grass, the few trees are hardy and curled by the wind, and their branches drip lichen. If I am patient and sit quietly I might see deer, birds, insects and ponies and then I sketch quickly, to capture the leaping stag or the nervous rabbits nibbling grass.

“Over the last 15 years I have walked the moor with my husband getting to know it in all seasons, feeling the wildness. This wild landscape makes me reflect on the interdependence of life.”

In the studio, her sketchbook observations of the creatures she has watched are transformed in her contemporary style, traditional crafts come into play as she cuts and impresses into lino – it takes about a month to design and proof each print.

“I hand print onto Japanese Hosho papers using Caligo relief printing inks, using several plates to create the colour layers and blend the colour edges in the way that Hokusai the Japanese printmaker made prints. I enjoy the sheer pleasure of carving vinyl and lino.”

Does her out-of-the-way location mean she is cut off from fellow artists?

“I meet monthly with other artists in the area. We discuss the work that we have been making and explore art techniques together. In order to keep connected with the contemporary art world I travel to London for specific exhibitions and sometimes art comes to us. I greatly enjoyed the Norman Ackroyd print exhibition in Exeter in March, especially as we met him at the private view.”

Luna’s work is in demand. She was showing in the exhibition Into the Landscape at the Goodwin Gallery in Barnstaple in April 2016. There the curator brought together Luna as a printmaker with a photographer-artist and a painter who likewise work in the wild landscapes of Exmoor and Dartmoor.

She is taking part in the West Country Makers exhibition at the South Devon centre Hannahs at Seale Hayne, and the Simonsbath Arts festival which celebrates the cultural heritage of Exmoor.

Her two big projects of the year are the exhibition Devon Printmakers at the Lantic Gallery, Tiverton, fromJune 18 to July 19, and the Devon Open Studios from September 10-25, when the public is invited to visit her at home as she works, and for which Luna has won an emerging artist bursary.

More information is at www.lunanorth.co.uk