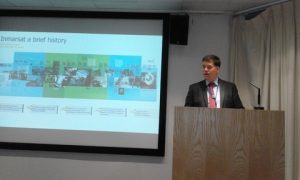 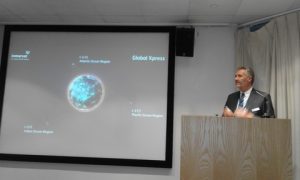 The worldwide FX service has been made possible by three new Global Xpress I-5 satellites, launched in 2015 and operating on Ka-band, with unlimited back-up provided by L-Band Fleet Broadband services via Inmarsat’s I-4 network. Spithout said that Inmarsat already had FX service commitments covering 600 vessels. He also predicted that the amount of data transferred ship/shore by the maritime sector would be eight times what it is today by 2020. 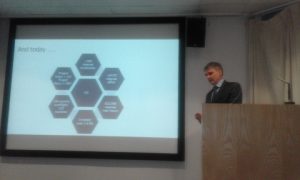 FX is the only satellite broadband marine communications system from a single operator, bringing massively faster broadband services to ships, but it is also the route to a change in business culture, according to Spithout.

Inmarsat Gateway – a “service ecosystem” developed with Cisco – takes the open platform approach that allows Inmarsat Certified Application Partners to develop content-rich apps that include bandwidth costs as part of the package. “Ship operators will be able to pick and choose the apps they want, and bandwidth can be ‘app-triggered’, so there is no bill shock down the line, ” Spithout said. 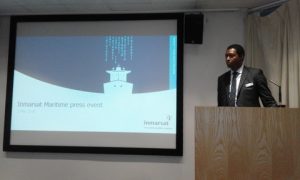 Drew Brandy who introduced the event 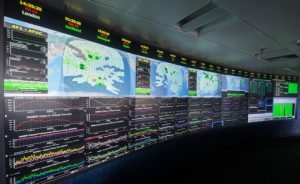 A view from the NOC

Both Broadhurst and Spithout repeatedly emphasised that the FX service is not simply a ‘pipe’ through which data and crew connectivity will be funneled. “We are an enabler looking in four different directions when it comes to enabling FX service developments  – operational efficiency, safety and compliance, crew welfare, and IT and security, ” said Broadhurst. “Apps could be made available within a customer’s existing bandwidth, or we can invoice the application provider and not the vessel. This is a fundamental change in shipping.” Telemedicine, for example, would require high bandwidth over a very limited period, and charges should therefore reflect usage.

Inmarsat is already in the advanced stages of a project working with Singtel subsidiary Trustware to make the latter’s Unified Threat Management cyber security app available via the FX service.