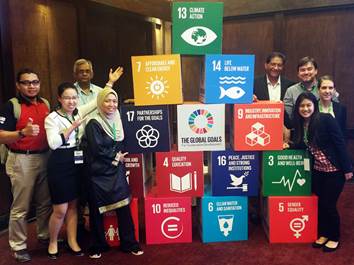 12/05/2016  – A team from IMO’s Marine Environment Division has won the best Portfolio Solution Award in the 8th International Waters Conference (IWC8) organized by the Global Environment Facility (GEF) in Negombo, Sri Lanka (9-13 May). The award was given for the project with the best strategy for scaling-up investments aimed at addressing global environmental issues facing international waters, including the oceans. International waters is one of the five thematic portfolios of GEF funding, with around 90 related projects being featured at IWC8 and some 300 currently underway worldwide.

When the United Nations General Assembly adopted the Sustainable Development Goals (SDGs) in 2015, it set a new development agenda for the 2015 – 2030 period. Two SDGs (Ensure access to water and sanitation for all and Conserve and sustainably use the oceans, seas and marine resources) are of particular relevance to the GEF’s IW investments. The official theme of IWC8 is Scaling Up GEF IW Investments from Source to Sea and Beyond in the Context of Achieving the SDGs.

IMO’s winning entry was selected from a large number of submissions made by GEF international water projects and the award was based on oral presentations from the final eight nominees. IMO’s Jose Matheickal, on behalf of the IMO team, delivered the award-winning presentation during the conference, which is being attended by over 300 participants from various UN agencies, donor agencies and member Governments. This is the fourth international award won by the IMO projects team.