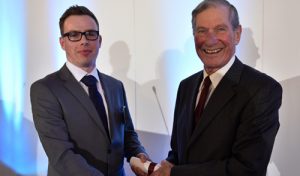 Over 300 delegates from across the globe attended the 13th International Naval Engineering Conference (INEC 2016) organised by FIGS Events Limited on behalf of the Institute of Marine Engineering, Science and Technology (IMarEST). With its highly topical theme ‘Engineering the Triple A Navy: Active, Adaptive, Affordable’ the biennial event was held at The Passenger Shed at Brunel’s Old Station in Bristol 26-28 April, and on 28 April hosted a visit by Her Royal Highness The Princess Royal, an Honorary Fellow of IMarEST.

“INEC provided a most stimulating three days; I have been delighted with the breadth and quality of technical papers presented and the excellent discussions that they generated, I am sure Brunel would have been proud!”, explains Cdr Matt Bolton RN, the Conference Chairman.  “To top it all, the visit by HRH The Princess Royal was not only a great honour but a true highlight as she spent well over an hour with us meeting groups of speakers, international delegations, the Sir Donald Gosling Award candidates and many other participants, impressing all that she met with her knowledge and interest.”

As Vice Admiral Sir Robert Hill, a Patron of INEC, explained “The written papers and the presentations by the young authors were assessed by a team of eight judges led by John Newell MBE, a fellow Patron.  They had a busy time before and during the conference, but were rewarded for their efforts by seeing the high standard of the papers” he added: “It is increasingly clear that the Sir Donald Gosling Award has a powerful effect in attracting the interest of young engineers in the defence maritime businesses.”

Sir Donald Gosling Award winners
The first prize of £5000 was won by Robert Taylor of the Babcock International Group for his paper entitled ‘The advantages and disadvantages of using variable speed pumps in commercial and naval marine applications’.  In his written technical paper and presentation, he described the fitting of variable speed pumps to sea water cooling systems of private yachts, commercial and naval vessels to improve economy and reduce emissions.

The second prize of £2500 was awarded to Oliver Simmonds of GE Power Conversion, Rugby, for his paper entitled ‘Advanced hybrid systems and new integration challenges’ which focussed on a hybrid (diesel and electric) propulsion system such as provided in the new UK MARS Tankers and a Norwegian logistics and support vessel.

In selecting the winner of the third prize, the judges were once again, as in 2014, unable to decide between two contenders, so two third prizes of £1500 were awarded.

The other third prize was won by Tim Goode of the Babcock International Group for his paper entitled ‘In-bore submarine tailshaft inspection’ which described the development and use of ultrasonic equipment designed to pass up the hollow core of submarine tailshafts to discover any cracks in the shaft.

John Newell MBE, Chairman of the Sir Donald Gosling Award judging panel commended all the candidates for their hard work in writing and presenting their technical papers.  He commented that “the Institute is very grateful to Sir Donald Gosling for his Award which continues to attract a significant number of high quality papers and presentations from younger authors with this year drawing the largest number of entries yet. This made our job that much more difficult but a great challenge. It is really encouraging to be seeing bright young engineers, scientists and technologists so enthused.”

Strong list of sponsors and supporters
Babcock International Group was the Principal Sponsor of INEC 2016 with BMT Defence Services, Rolls-Royce, QinetiQ, GE’s Marine Solutions and BAE Systems as major sponsors. The US Office of Naval Research Global, KIVI Engineering Society, UKNEST, The IET, and the Society for Underwater Technology were all supporters of the three-day event.

Babcock International Group, BMT Defence Services, Rolls-Royce, QinetiQ, Lloyd’s Register, L-3 Marine Systems UK, Wärtsilä, and Northrop Grumman Sperry Marine all exhibited; and delegates took advantage of the excellent networking opportunities both within the exhibition hall, and throughout the social programme, which included a reception aboard Brunel’s ss Great Britain. The Royal Navy Mine Counter Measures Vessel HMS Atherstone was present in Bristol for the duration of INEC and many delegates took tours of the ship. An Industrial Visit to Rolls-Royce proved another attraction and included the opportunity to view the MT30 Marine Gas Turbine build/test facility.

All delegates are invited to contribute to the post-event survey on the INEC website at www.inec.org.uk. The online proceedings will be available via the IMarEST website shortly.

The next INEC will be held in Glasgow in Spring 2018. Further information will be available from FIGS Events on the dedicated website at www.inec.org.uk or from inec@figsevents.co.uk

Contracting in the new era