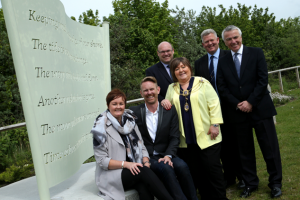 ABP has unveiled a series of art installations designed to add interest to the new public right of way around the periphery of Alexandra Dock, site of the new Siemens development.

The works represent an investment of over £100, 000 by ABP and the reveal was announced by Chief Executive of Hull 2017 Martin Green, during an event on the site today (Thursday).

He said: “This project represents how it should be, how it should work. This is legislation, upheld by the local authority who are working with private companies who in turn see investing art as supporting their business message and they are therefore happy to invest in initiatives such as this along with our engineers and manufacturers. All of them working together for the betterment of the community.

“This is something that perhaps businesses wouldn’t have done in the past but when they do we end up with pieces that lighten and brighten our public spaces.”

The pieces have been designed by five students and interns of Hull School of Art and Design Jordan Palmer, Debi Keable, Luke Beech, Holly Lawson and Peter Coates. A sixth piece was created by professional artist Jason Heppenstall.

The artists were asked to base their work on the theme of Hull’s Maritime ‘Past, Present and Future’.

The works include pieces based on disused crane grabs, containers, luminous sheet metal inscribed with poetry, a traditional sailor’s knot and an enormous godwit made from industrial chains. All of the pieces can now be viewed up close by anyone using the footpath.

Artist Debi Keable created the piece ‘Ebb Flow’. She said: “To be here today after 18 months of work is just surreal. It’s been amazing working with all of the partners and the other artists but to now see my sculpture in place, in my home city, alongside all of the other pieces is amazing.”

Holly Lawson created a piece entitled ‘Sheepshank’. She was moved by people’s reactions to her creation.

“To see people’s faces and to hear their words of encouragement today has actually been inspiring, ” said Holly. “It’s made me realise that perhaps I can do it and I can succeed in what is a very competitive industry.

“People have loved the work and many of the visitors have recognised what it is straight away. I’m really pleased with it and for it to be in such a great location is the icing on the cake.”

ABP Director Humber Simon Bird said: “It’s amazing to think that just six years ago this project was nothing more than a series of conversations between ABP and Hull City Council.

“Now we’re in 2016, with the facility almost complete, celebrating the unveiling of six spectacular pieces of art, designed by six very talented people, which can now be enjoyed by those using the new footpath and those who will soon be coming to work at this ground-breaking development.”

“These distinctive sculptures have been created by local students and interns at the Hull School of Art and Design. The designs pay homage to the city’s maritime history and will feature in an integral part of the new footpath.

“We are delighted to have invested in this new walkway and I believe it will become a popular spot with both residents and visitors to the city.”

As well as the six sculptures, three large exhibition panels designed by pupils of Victoria Dock Primary School and Malet Lambert School, as well as transport charity Sustrans and the Trans Pennine Trail, have also been installed.