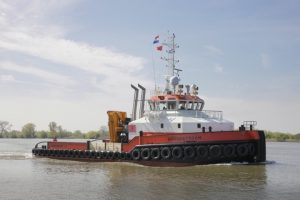 The first of Damen’s new Shoalbuster 3512 class was recently handed over to Dutch marine services specialist Van Wijngaarden Marine Services B.V. in the port of Boven-Hardinxveld, the Netherlands. At the ceremony the Lady Sponsor Mrs. Elske de Bruijn-de Vries officially named the vessel and made a widely-appreciated speech praising the technical capabilities of the vessel. Mrs. Elske de Bruijn-de Vries is the wife of Mr. C.A. (Niels) de Bruijn, a member of the executive board of Van Oord, and is well-known for her role in the TV show ‘Het mooiste meisje van de klas’.

At 35 metres in length the 3512 is the largest Shoalbuster built to date, yet with a draught of just 2.9 metres it has unrivalled shallow waters capability. Work began on designing the vessel at Damen Shipyards Hardinxveld in February 2015, with the objective of delivering a multi-purpose workboat capable of undertaking a wide range of roles including towing, mooring, pushing, anchor handling, dredge support, supplying and other support roles. The Damen Shoalbuster range is well known for being exceptionally versatile, capable of handling tasks ranging from short and long distance towing to support for offshore projects such as the construction and maintenance of windfarms. The 3512, with a bollard pull of 56 tonnes, a deck area totalling 145 m²; enough space for seven 20 foot and two 10 foot containers, and an 11.3 tonnes @ 16.5 m deck crane, extends that reputation even further.

The Noordstroom is the fifth Damen vessel to join the 14-strong Van Wijngaarden fleet. The first was a second-hand Damen Pushy Cat 42 bought over forty years ago and which is still in active service today. That was followed by three Shoalbusters; one 2609S and two of the 3009 class, and they, along with the other vessels in the fleet, are deployed all over the world.

As an illustration of just how flexible the Noordstroom is, as well as her regular equipment she can be fitted with a range of auxiliary modules when needed, including a 50-tonne A-frame with a plough for seabed levelling, a four-point mooring system, an ROV platform and a diving operations platform.

The Noordstroomis equipped with tanks capable of storing 255 m³ of fuel oil and 43 m³ of fresh water. Other features include a fresh water maker, a sewage treatment plant and a moonpool (Netto: 700 x 600 mm).

The propulsion system of the Noordstroom is powered by three 970 kW Caterpillar C32 ACERT 4-stroke diesel marine engines delivering a total of 2, 910 bkW at 1, 800rpm. The middle engine is configured with a generator to supply electrical power to the hydraulic deck gear including the crane and winch, as well as the bow thruster. Each engine also has a Reintjes reverse reduction gearbox with built-in hydraulically-operated clutch, and drives a Promarin fixed pitch propeller in a Van der Giessen Optima Nozzle. There is also a 300 bhp electrically-driven bow thruster.

The two Caterpillar C7.1 main generators on board the vessel generate 187.5 kVA of power each. In addition, one 600 EkW emergency power generator coupled to the centre C32 main engine has been fitted. Other auxiliary equipment include transfer pumps for freshwater and fuel oil, a Westfalia OTC-2 fuel oil separator, and an electrically-driven hydraulic set with two E-motors of 110 kW and 52 kW respectively.

The navigation and communication equipment on-board the Noordstroom is tailored to the requirements of global trade.

The Noordstroom accommodation provides heated and air-conditioned living spaces, including a captain’s cabin, two single crew cabins, four double crew cabins, a galley, a mess, and sanitary facilities. There is even an office for the client, complete with V-SAT connection. The facilities comply with ILO2006 rules, and can take up to 11 persons.

The Noordstroom is classed by Bureau Veritas: I # HULL •Mach, Tug Unrestricted navigation • AUT-UMS, with an Anchor Handling notation and sustainable practises onboard resulting in a ‘Clean Ship Notation’ conforming to the IMO’s ‘Green Passport’ regulations.

Peter van Wijngaarden, Managing Director of Van Wijngaarden Marine Services, summed up the project. “The Noordstroom is a versatile, innovative, sustainable and very powerful work/tugboat, completely designed to meet the requirements of the current market.”

Damen Shipyards Group operates 32 shipbuilding and repair yards, employing 9, 000 people worldwide. Damen has delivered more than 6, 000 vessels in more than 100 countries and delivers some 180 vessels annually to customers worldwide. Based on its unique, standardised ship-design concept Damen is able to guarantee consistent quality.

Van Wijngaarden Marine Services is an independent company, providing maritime services and operating a large and modern fleet of workboats, for deep sea, coastal and inland waters. They operate all around the world, mainly on projects in the industries of Transport, Maritime Services, Dredging & Marine Construction and Offshore Energy.

The company was founded in February 1974 with the aim of chartering auxiliary material for dredging and marine construction projects. In 1975 Van Wijngaarden Marine Services starts to charter equipment abroad. The first job was done in the United Kingdom, after which many other global projects followed. With the purchase of the first ‘Shoalbuster’ other markets segments came within reach, including long distance towage and offshore projects such as supporting / supplying vessels for construction / maintenance of windfarms.

Continuous care for quality, health, safety and environment is a comprehensive part of Van Wijngaarden Marine Services business policy. All seagoing vessels are classified by Bureau Veritas and meet the requirements of the flag state. Company policy is aimed at continually improving the performance of employees in terms of quality, health, safety and environment. Regular internal audits and training of crews and staff ashore contribute to this.

Theodore E.Veniamis on the Challenges, goals and prospects for Greek shipping