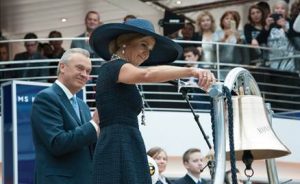 From the Christening with Queen Máxima. Elegant event celebrated Holland America Line’s rich Dutch history steps from where the company was founded more than 143 years ago

23 May, 2016 — In a ceremony rich with history and meaning, Holland America Line held a Dedication Ceremony for ms Koningsdam May 20 in Rotterdam, the Netherlands. Her Majesty Queen Máxima of the Netherlands officially blessed the bell and named Koningsdam on board the ship in front of invited dignitaries, cruise guests, travel partners and media.

The celebration began with Her Majesty Queen Máxima performing the ceremonial honours of blessing the ship’s bell in the Lido pool area by pouring a glass of champagne over the bell. The blessing of the bell is a hallowed Holland America Line tradition when welcoming a new ship to the fleet.  Her Majesty also was the first to signKoningsdam’s commemorative wall that will become a permanent installation on the ship.

Next, the ship was officially christened during a ceremony in the World Stage theatre when Her Majesty Queen Máxima pulled a rope to trigger the traditional champagne bottle break on Koningsdam’s hull.

Orlando Ashford, Holland America Line’s president, said,  “It’s an honour to have Her Majesty Queen Máxima as the godmother to Koningsdam, and May 20 was a truly special day with Her Majesty delivering the ceremonial traditions of welcoming our newest ship to the fleet. As our company was founded in Rotterdam more than 143 years ago, it was fitting to return to our roots for Koningsdam’s royal dedication.”

Also a traditional part of dedicating a new ship for the line is the appointment of Mariner Ambassadors to represent the important role of loyal repeat guests in the company’s ongoing success. Serving as Koningsdam’s Mariner Ambassadors were Enrique “Rick” Encarnacion and Ernest Schenk. Both dedicated Mariners, the pair have sailed more than 1, 650 days on Holland America Line cruises. Schenk first sailed with the line on a trans-Atlantic cruise aboard ms Ryndam in 1954. Encarnacion first cruised on Holland America Line in 1997 aboard an ms StatendamPanama Canal sailing.

Following the ceremony, a gala luncheon was held on board in addition to shipwide celebrations throughout the day. In the evening the ship set sail for Amsterdam, the Netherlands, and fireworks lit up the sky as Koningsdampassed Hoek van Holland.

Thousands of Dutch residents came out throughout the day to join in Holland America Line’s special events.

During its inaugural season in Europe,  Koningsdam sails in the Mediterranean and then repositions from Civitavecchia, Italy (the port for Rome), to its summer home port of Amsterdam. The ship will go on to sail roundtrip Amsterdam itineraries to Norway, the Baltic and Iceland.

Following its Europe season,  Koningsdam will homeport at Port Everglades in Fort Lauderdale, Florida. The ship will sail one cruise to the Bahamas and then a series of Caribbean voyages from November 2016 through March 2017.

About Holland America Line [a division of Carnival Corporation and plc (NYSE:  CCL and CUK)]

Holland America Line’s fleet of 14 ships offers more than 500 cruises to more than 400 ports in 98 countries, territories or dependencies around the world. From shorter getaways to 115-day itineraries, the company’s cruises visit all seven continents with highlights including Antarctica explorations, South America circumnavigations and exotic Australia/New Zealand and Asia voyages; four annual Grand Voyages; and popular sailings to the Caribbean, Alaska, Mexico, Canada/New England, Bermuda, Europe and the Panama Canal. The line currently has a new 2, 650-guest ship,  ms Koningsdam, delivered in April 2016, as well as a second Pinnacle Class ship,  ms Nieuw Statendam, due for delivery in November 2018.

The company recently announced $300 million in brand enhancements to secure its position as the leader in premium cruising. Fleetwide, the ships feature innovative initiatives and a diverse range of enriching experiences focused on destination immersion and personalized travel. Guests can expand their knowledge on board at the Culinary Arts Center, presented by Food & Wine magazine; Explorations Café, powered by The New York Times; and Digital Workshop powered by Windows. Outstanding entertainment fills each evening at venues including Lincoln Center Stage, Billboard Onboard and B.B. King’s Blues Club. The dining experience can be savored at a variety of restaurants with menus that feature selections from Holland America Line’s esteemed Culinary Council that comprises world-famous chefs who design dishes exclusively for our guests.

Posidonia 2016 – Statement by the President of UGS