A new era for Azerbaijan 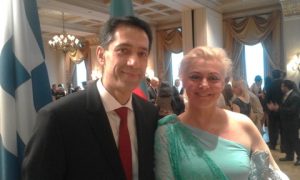 On the occasion of the National Day, being actually the 98th Anniversary of the proclamation of the First Republic of Azerbaijan – 18th of May 1918 to 28 April 1920, H.E the Ambassador and Mrs Rahman Mustafayev hosted a reception early last night in central Athens’ landmark Grand Bretagne hotel.

The diplomatic corps, MPs from all sides of the Greek parliament headed by the minister of the interior Panagiotis Kouroublis, military attaches, academics, commercial chambers representatives and many business people – mainly from the energy sector and its carriers (that it is to say shipping),  enjoyed the drinks, dips and the live classic music including Azerbaijani songs in the unique environment of the hotel’s grand ballroom. Over 300 guests made it, even delayed given the security restrictions imposed in central Athens and elsewhere in Athens’ plain given the arrival of Russia’s president Putin.

Azerbaijan, currently an important energy stakeholder for Greece and Europe, is at the forefront of development but also we hope soon for peace in its region and wider periphery too.

There are very strong ties between Greeks and the people of Azerbaijan spanning over three centuries for those knowing in depth history and in particular business history and lately, particularly post 2010 bilateral agreements including important ones in maritime education and training, to name but a few are being furthered.

It was a good chance to meet many ambassadors, trade and educational leaders with very much interest in shipping and the forthcoming Posidonia! Excellent!