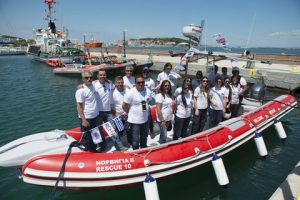 ‘Norway II’ is the second lifeboat to be donated to HRT and follows ‘Norway I’ that has operated since September last year in the Aegean Sea around Kos.

In her speech on Lesvos, the ‘godmother’ of the boat, Mrs. Marit Nybakk, Vice President of the Parliament of Norway said: “We are proud of the rescue achievements of the RS executives and HRT volunteers in the Aegean sea” She wished the lifeboat’s crew “good rescues” before christening the boat.

H.E. the Ambassador of Norway, Mr. Gjelstad, said that the cooperation between Norway and Greece was extremely valuable and he praised the work of the Norwegian RS for supporting sea rescue in Greece. He also underlined that the private and public sector partnership can generate great results and praised the inhabitants of Lesvos and HRT volunteers in the island for the incredible help and support they have offered to the refugees.

The Maritime Director of RS, Mr. Webjørn Knudsen said: “It is difficult for us to understand how hard HRT volunteers have worked in order to help our fellow human beings when their life was in danger at sea” He added that he was proud of the cooperation and for what had been achieved in such little time.

George Kalogeropoulos, President of the Central Command of HRT, emphasised the immense support of RS, through lifeboat donation, offer of equipment and training programs.

Also present were the Commodore of the Hellenic Coast Guard, Mr. Nikolaos Arbouniotis, the Regional HCG Governor -on behalf of the Chief of HCG- Vice Admiral Stamatios Raptis, and many other representatives from local authorities.

The boat’s donation falls under the support offered to HRT by RS and the Norwegian government, aiming at reinforcing the SAR operational capability of HRT so that it is in a position to respond to the immediate needs that may come up from a possible new burst of migrant flows to Greece, as well as to ordinary incidents at sea. The ‘Norway ΙΙ’ will operate at the sea area of Lesvos, auxiliary, as always, to the operation of the Hellenic Coast Guard.

At the christening ceremony opening remarks were addressed by Mr. Theodoros Valssamidis, Vice Governor of North Aegean, Captain Nikolaos Passadis, Harbour Master of the Central Harbour of Mytilini and Mr. George Psanis, President of the City Council of the Municipality of Lesvos. Also present was a representative of INTERAMERICAN, gold sponsor of HRT – Mr. John Diamantis – associate of the company in the island of Lesvos.

The Hellenic Rescue Team warmly thanked all the sponsors and supporters that contribute to its work and especially the Norwegian Society for Sea Rescue (RS), the Norwegian Government, Hellenic Coast Guard Headquarters, Setur marina at Mytilini and particularly its Director, Mr. Konstantis Xidas, the island’s Authorities and in particular the Central Harbour of Mytilini, the North Aegean Region, the Municipality of Lesvos, the Lesvos Fire Brigade, the Regional Police Division of North Aegean, the Police Division of Lesvos, AEGEAN, INTERAMERICAN, HELLENIC SEAWAYS, CORAL, HATZOPOULOS S.A., the Hellenic Electricity Distribution Network Operator S.A., PFIZER, ALPHA BANK, GENESIS PHARMA, LALIZA, DACON and above all the volunteers of HRT Lesvos.

The H.E.R.O. Awards 2016 will recognise actions that took place, or were completed, in the period 1st July 2015 to 30thJune 2016.  No applications can be accepted for events or actions that fall outside this period.

The closing date for applications is 2400 UTC on 29 July 2016.For full details on how to enter, and the terms and conditions of entry, visit www.imrfhero.org; Alternatively, please write to The H.E.R.O. Awards Co-ordinator, International Maritime Rescue Federation, 50 Allardice Street, Stonehaven