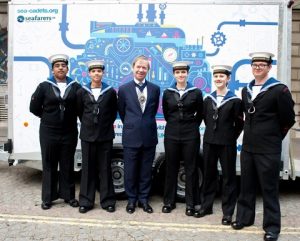 The Lord Mayor was joined by Sea Cadets at the launch of the ‘Marine Engineering Pathway’ project at Seafarers UK’s Annual Meeting in Mansion House on 15 June.

The Lord Mayor of the City of London, Lord Mountevans, lent his weight to the launch of a new three-year project designed to inspire and engage young people across the UK in thinking about a future in marine engineering. It is being led by maritime charity Seafarers UK, in conjunction with its delivery partner Sea Cadets.

The launch of the project was announced to more than 150 of Seafarers UK’s supporters and beneficiaries at the charity’s Annual Meeting at Mansion House on Wednesday 15 June. Speaking at the event, Lord Mountevans said: ‘This eye-catching initiative will help more young people learn about the wide mix of career opportunities that exist in the UK’s world leading maritime sector, and in marine engineering in particular. The maritime sector is a huge economic contributor, employing over 140, 000 people, and a real area of competitive advantage for the UK. My hope is that as these mobile units travel around the UK, more young people, schools, teachers, parents and careers advisers will be inspired by the idea of pursuing a hugely rewarding career in marine engineering.’

The Marine Engineering Pathway project sees the roll out of seven custom-built mobile learning units (Pods), based regionally across the UK, over the next three years. The first two will be in place in 2016, one in London and the other in the South West, with the others coming on stream in 2017 and 2018 according to the speed and success of Seafarers UK’s fundraising.

Each Pod holds a sectioned engine, a working engine and an array of other marine engineering equipment that young people will be able to get their hands on and begin to learn about from trained Sea Cadets volunteer instructors. They will be used by Sea Cadet units, in schools and at local events and will form the basis of taster sessions and workshops in marine engineering, with special focus on pupils in Year 9, when choosing options can become critical to future career plans.

Barry Bryant, Director General of Seafarers UK, said: ‘Seafarers UK has been supporting maritime youth work and those organisations focused on preparing young people for a potential career at sea for almost 100 years. This joint initiative with Sea Cadets is a great way of reaching out to young people and helping them to think more creatively about their career aspirations and the opportunities that exist in maritime and marine engineering.’

Martin Coles, Chief Executive of Marine Society and Sea Cadets, said: ‘This is a pioneering project for the charity. Our core aim is to build confidence so that young people can find their course in life. This combined with our experience of working with young people has helped us shape a project with Seafarers UK we believe can inspire more young people to take a step towards a better future, for them and their families.’

The Pods are specially designed to provoke interest from both girls and boys. Research from Tomorrow’s Engineers Week (Nov 2015) revealed 28% of girls aged 11-16 said that online images of engineering are too male-orientated. The eye-catching design hosts semi-hidden icons that hint at a relationship with engineering, ranging from soda cans to lipstick, recycling to play stations. The consequence the UK faces as the shortage of people with engineering skills grows is well reported, triggering concern across the sector for the long term future of the industry in the UK*.

The project will be run initially over a three year period (2016-18), before hopefully becoming a longer-term initiative for Sea Cadets. It is one of three legacy projects that Seafarers UK is fundraising for as part of its Centenary Year in 2017, the theme of which is ‘Supporting Seafarers: Past, Present and Future’.

At its Annual Meeting, Seafarers UK also launched its 2015 Impact Report, highlighting that last year the charity awarded £3.6m in funding, ultimately helping over 170, 000 people. It achieved this by providing 87 grants in support of 83 projects and 67 charities and organisations in the UK and overseas, which in turn provided welfare and education services to those serving and ex-seafarers most in need, and their dependants.