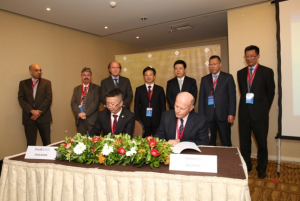 During the event at the Athens Divani Caravel Hotel, a Memorandum of Understanding was signed between Tsavliris Salvage and Zhoushan Port Free Trade Zone Administrative Committee regarding the creation of a salvage network in Chinese waters. Mr Andreas Tsavliris verified the agreement which was signed by Mr Nicolas Tsavliris.  On behalf of Tsavliris Salvage, Mr George Tsavliris said: “The relationship and cooperation between China and Greece is an extremely important one which continues to grow from strength to strength”.

The miraculous rise of the Zhejiang Zhoushan Archipelago New Area is focused on shipping and attracts a growing number of maritime industries to settle in Zhoushan.

In the event of a casualty in Chinese waters,  Tsavliris Salvage will be able to provide its clients assistance whether it be in an operational, advisory or technical capacity, to ensure that the level of service they receive is nothing short of first class. At the same time, the participation of Tsavliris Salvage will offer  strong support to the establishment of Zhoushan International Marine Services Base, which is of great significance in promoting the development of the Yangtze River Economic Belt.

Moreover, Tsavliris are also seeking to establish, through the exclusive joint venture with its Chinese partners Kamji Marine, an international marine services online platform that will provide one-stop services for ships and shipowners around the world. 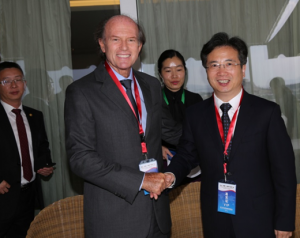 Andreas Tsavliris with the Mayor of Zhoushan, Zhou Jiangyong, head of the Chinese delegation 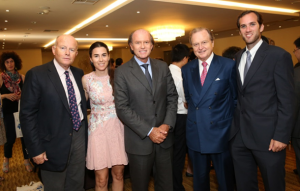 The panel with George A. Tsavliris at the centre

The “6th Blue Shipping Summit 2016” was held on 6 June, the opening day of the Posidonia 2016 Exhibition, at the Athens Hilton Hotel. The landmark event was sponsored this year by Tsavliris Salvage.

The conference was titled “Salvaging the Environment” and focused on future trends and challenges of the shipping industry with a particular emphasis on the new regulations as well as implementation of global environmental issues in shipping today. The ever increasing regulations and technological breakthroughs have further burdened an already challenging business climate.”

Chairman of the conference Mr George Tsavliris said: “Although the shipping industry has shown a significant sensitivity in adopting measures to protect our marine environment, it needs to become far more proactive in preventing pollution and in addressing the industry’s ecological impact”.

Following the adoption of the Paris Climate Change Agreement in December 2015, the international shipping industry is working on how to further contribute to the global efforts to address climate change and see “Where is Shipping heading?”

High-level speakers (Christine Berg – Head of Unit, European Commission for Safety & Ship Source Pollution, Katharina Stanzel –Managing Director of INTERTANKO, Chris Wiernicki – Chairman of IACS, Philip Embiricos – Past President of BIMCO, etc.) and conference panelists contributed to a day packed with exchange of experiences and a stimulating discussion before a distinguished audience. The successful forum was organised by Jannis Kostoulas,  President of Mare Forum and by Karen Kokabi, Managing Director of Blueship.

Captain George Polychroniou of Tsavliris Salvage, explains the benefits of AIS to the shipping industry

Tsavliris Salvage participated in the Marine Traffic seminar on 9 June at the Posidonia Exhibition 2016. The seminar focused on AIS (Automatic Identification System) and the benefits it offers to the global maritime industry.

Leading experts on AIS explained how to extract value for business intelligence.

In his presentation Captain George Polychroniou, Operations Manager at Tsavliris Salvage, explained the benefits of AIS to the shipping community and Tsavliris Group in particular. He mentioned that “Tsavliris Salvage Group adopted AIS in 2003 in order to monitor our salvage/towage operations, manage our fleet worldwide and prevent pollution”.

He concluded that “AIS information can reduce collisions and consequently save lives at sea and avert pollution”. 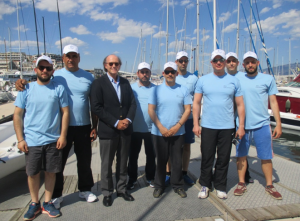 Tsavliris Salvage Group took part in the Charity Rowing Competition held by Hill Dickinson on 26 May 2016 at the picturesque Microlimano in Kastella and came FIRST winning the gold medal.

Our Tsavliris ladies team together with Messrs Evdemon & Partners team also competed in the Rowing Competition contributing to this fun filled charity event coming sixth out of 12 teams.

The rowing competition was in the form of timed races, with two boats competing against each other in each “heat”. The event was followed by a cocktail reception.

Congratulations to the organisers and all the participants!

Alexandros A. Tsavliris of TSAVLIRIS SALVAGE GROUP took part in the Posidonia  2016 Tennis Tournament with tennis partner  Apostolos Kaltis of Neptune Lines which was hosted by Ken Scott of Winter Scott and Louise Glover of E.G. Arghyrakis & Co., at Vouliagmeni Tennis Club on Tuesday 7 June 2016. The dynamic duo was successful in winning the Cup out of a group of around 20 couples.

This year’s final opponents were Aris Pittas of Eurobulk and John Minaidis of A.M. Nomikos.

Alexandros follows in the footsteps of his father Andreas A. Tsavliris   who has also previously won the Cup on three different occasions.