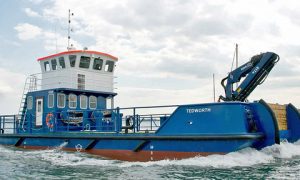 SHIPSHAPE: A Meercat Workboat, the Tedworth, which was sold last year

Meercat Workboats scores a hat-trick to coincide with the European Championships – which is more than can be said for England!

The Portchester-based boat builder is proud to announce it is moving premises, that Seawork was a huge success and that it expects to benefit from the recent Brexit vote.

MC28 is a 15m x 6m monohull workboat currently in build for Briggs Marine at the company’s Portchester footprint near Portsmouth in Hampshire.

To coincide with the end of the build Meercat Workboats will be moving to Units 3a & 3b Hythe Marine Park, Shore Road, Hythe, near Southampton.

The move is anticipated to take place in September 2016.

Jamie Lewis, who is Meercat Workboats Managing Director, said: “This move really is significant for us.

“We’ve been searching for a new home for 18 months and it’s really great news that we’ve found a fantastic landlord in Oceanic Estates and superb new premises.

“The footprint really is perfect – and we need it to deliver on our FY17 business plan and our current pipeline.”

The company is also pleased to report that it enjoyed an excellent Seawork exhibition in Southampton.

Jamie added: “With several interested parties we really expect to conclude the transaction by the month end.

“This really will be a very good win for us as the boat genuinely is fantastic.”

Meercat Workboats is also looking forward to reigniting its export business based upon the recent EU Referendum.

The company has built 28 boats to date, exporting two to Norway, two to the Republic of Ireland, one to Sweden, two to Saudi Arabia, one to Tasmania, one to Peru, and one to Australia.

With exports to date totalling a third of the builds the business is best placed to maximise the potential of a lower value Sterling.

Nicholas Warren, the CEO of Burgess Marine, the parent company to Meercat Workboats, said: “The referendum has given us a wonderful opportunity to re-energise our export business.

“Domestically the business is performing ahead of expectations but to open up International markets again, to coincide with the firm’s relocation to better premises, is seriously opportunistic.

With workshops and offices in Lowestoft, Dover, Portsmouth, Portchester, Southampton, Poole, Avonmouth, Devonport, and within STP Palma the business is ideally located not only to support the UK’s largest passenger ports, but also shipping in general throughout the United Kingdom and Superyacht’s based in Mallorca.

Burgess Marine is an ISO 9001:2008 British Standards Institute accredited company and holds ‘DNV Approved Supplier’ status; the company is also a full member of the Association of Diving Contractors.