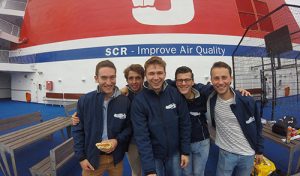 Eleven teams of university students from across the world will take part in a unique sporting and engineering challenge this week when they race their human-powered submarines in the third European International Submarine Races (eISR 2016) at QinetiQ’s Ocean Basin in Gosport, UK from 5th – 15th July. The races are sponsored by principal sponsors, QinetiQ and DE&S, as well as Babcock Group, BAE Systems and BMT Defence.

The university teams that have qualified for race are as follows:

“It’s great to see so much enthusiasm among students for this unique and challenging engineering and sporting event. This year’s competition started with 18 teams last October, and after a gruelling winter of design and build, eleven teams of highly dedicated young men and women remain to test their machines against the real-world adrenaline of the underwater racing environment. By the end of the week they will have not only honed their craft to efficient racing machines, but they will also have learned priceless life lessons in teamwork and grace under pressure.” Race Director, Professor William Megill, FIMarEST.

The students’ engineering skills will be put to the test with crucial last-minute adjustments and even complete reconstructions occurring throughout the week. It will be a demanding but hugely rewarding experience. Many will have to work long hours on their submarines to ensure they can not only complete the course, but also reach a competitive speed.

On Saturday 9th July, an Open Day & Careers Fair will be held at Hilsea Lido in Portsmouth. This is free for the public to attend and will include live demonstrations of human-powered submarines, the chance to talk to companies about careers in the marine sector and attend masterclass talks about the opportunities available. A keynote speech will be made by Gwyn Griffiths, a leading ocean technologist and founder of the Marine Autonomous and Robotic Systems facility at the National Oceanography Centre. Having worked in the field for over 40 years, he will discuss how to go about building a successful career and will share stories of several of his own students and how they have progressed their own careers in marine technology.

Stanley Gray lecture: Can marine autonomy save the world?

The IMarEST’s Stanley Gray lecture will be held at 18:30 on Wednesday 13th July at the Royal Navy Submarine Museum in Gosport. Presented by Dr Graham Brown, Divisional Director, Oil and Gas, at Sonardyne International, the lecture will look at whether “marine autonomy can save the world”. Graham will discuss some recent and on-going projects in marine monitoring of carbon capture and storage and the developing use of autonomy in offshore energy. A tour of HMS Alliance will be available to attendees beforehand at 17:45. Please register here.

About the Ocean Basin

QinetiQ’s Ocean Basin at Gosport, Hampshire was built in the 1950s, and is one of the largest freshwater indoor tanks in the world. It has recently been used to test scaled models of the new British aircraft carriers, HM Ships Queen Elizabeth and Prince of Wales for stability and handling. A recent, substantially high spec upgrade has given the wave-maker even greater capacity to accurately simulate real sea conditions, capable of generating regular waves and both long and short-crested irregular waves.

About the European International Submarine Races

The eISR are an initiative that the IMarEST challenges teams of university students to design, build and race human-powered submarines against the clock on an out-and-back course. The concept combines engineering design challenge with technical skill development and sets them in a unique and exciting sporting competition.

The basic rules of the sport are straightforward – teams must design, build and race flooded submarines piloted by a single scuba diver, who must be fully enclosed within the hull of the machine. All propulsion power must be provided by the diver during the race (i.e. no energy storage devices such as flywheels or batteries are allowed), but otherwise the design rules are open to whatever innovation teams decide to use.

The eISR is also about developing real, practical engineering skills. In the funding-constrained university environment, the practical elements of curricula have been replaced with theoretical calculation and computer modelling. A submarine big enough to contain a diver is a real, tangible machine, and the mechanisms have to produce and take real forces. At the same time, the challenge isn’t so great that the students can’t make the parts themselves – this provides an invaluable learning experience as they see their CAD drawings come to real life.

Finally, the competition is about working as a team in a time-critical, adrenaline-charged atmosphere. During the build-up to the race, the students learn to exploit each other’s’ strengths, and design into their machines what they think they will need to succeed at the races. In initial testing, they learn where the weaknesses are, and make considered adjustments to their designs. Then, once they arrive on the racecourse, and really put their machines to the test, they invariably find new challenges, and have to bring out their engineering knowledge to find solutions on-the-fly with limited facilities. Such experience is invaluable to them later in their careers, regardless of the direction they take.

The IMarEST is an international membership body and learned society that brings marine engineers, scientists and technologists together into one professional body. The largest marine organisation of its kind, it spans 128 countries and works to promote the scientific development of marine disciplines, providing opportunities for the exchange of ideas and practices and upholding the status, standards and expertise of marine professionals worldwide.

Members are able to gain professional registration (such as Technician, Incorporated, Registered or Chartered status). Education is supported through the MLA, a subsidiary of the IMarEST Group that delivers distance e-learning.

The IMarEST is an NGO with consultative status at the International Maritime Organization (IMO), observer status at the Intergovernmental Oceanographic Commission, International Hydrographic Organization, the London Convention/London Protocol (LC/LP) and the Joint Group of Experts on the Scientific Aspects of Marine Environmental Protection (GESAMP) and it has special consultative status with the Economic and Social Council of the United Nations (ECOSOC).