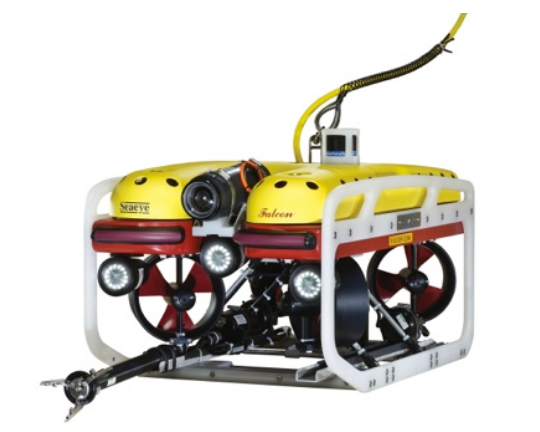 Falcon – the world’s most successful ROV of its class.

Seven orders from seven organisations in seven weeks confirms the status of Saab Seaeye’s Falcon as the world’s favourite and most successful ROV of its class, says the company, citing orders from a span of sectors including oil & gas,  renewables, scientific, security, hydro and aquaculture.

Its success comes from a design measuring just 1 x 0.5 x 0.6 metres that has the power and versatility to undertake many remarkable tasks with unprecedented reliability, say customers.

They quote examples where the Falcon has worked 1000 hours virtually non-stop on a salvage operation, swum five kilometres along a tunnel, carried a 4.3 metre vlatex shark on its back, filmed under Antarctic sea ice and carried its own weight in bolt-on equipment.

The Falcon’s winning concept comes from having packed five powerful thrusters and an intelligent distributed control system into a small, easily manhandled size.

Its power and control means it can master strong crosscurrents whilst undertaking precision tasks with steadiness and precise manoeuvrability.

Distributed intelligence means that each device on the vehicle has its own microprocessor allowing tools and sensors to be easily added or changed and custom options to be integrated – making it an ideal platform for numerous intricate and demanding applications.

Here is what some owners say about their Falcon:

Australia – Oil & gas inspection
“We keep finding ways of making the Falcon do the work of larger ROVs, and save money for our customers.”
Dive Works

USA – Education
“The Falcon is the most widely used ROV in the industry and is therefore the one students are most likely to come across in their working life.”
Northwestern Michigan College

USA – Reservoir outlet construction
“The Falcon performed tirelessly underwater for over two years, working three to four hours, virtually every day, including a stretch of 12 days, for 24 hours a day.”
AUS Diving

France – Dam and tunnel inspection
“In thousands of hours of dive time Falcon thruster technology has proved to be the most reliable in the ROV world.”
Jifmar Offshore Services

USA – Police – search and recovery
“The Falcon was picked as the best of all compact ROVs.”
Los Angeles Sheriff’s Department

South Africa – Movie
“Whilst filming the movie ‘LUCK’ the Falcon was powerful enough to manoeuvre a 400Kg 4.2 metre long replica of a tiger shark strapped above it.”
Marine Solutions

West Africa – Oil & gas
“For me the Falcon is the best tool for our operations . . . it’s a small, yet highly efficient ROV.”
Perenco Oil and Gas

Asia – Infrastructure assessment and seabed surveys
“ We chose the Falcon for its versatility and reliability – and for its power to cope with currents.”
DCNS

Chile – Archaeological research
“The Falcon has a delicate touch that can carefully remove artefacts from wrecks.”
Nautilus

USA – Marine conservation – Atlantic Ocean
“Deploying the Falcon [in strong currents] for hundreds of hours of filming has enabled us to gather essential scientific data.”
Oceana

UK – Oil & gas – Leak detection
“I’ve found the Falcon can be adapted to do just about anything.”
HPR ROV

Saab Seaeye is the world’s leading underwater e-robotics company, with the most advanced range of tethered, autonomous and hybrid robotic systems, engineered to address the diverse range of tasks found across commercial, defence and scientific
markets.