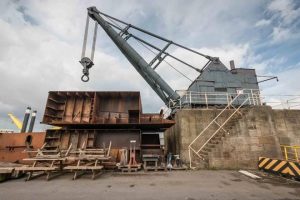 A £500, 000 programme of refurbishment is underway on Hull’s Alexandra Dock to ensure the long-term future of three listed structures.

This latest scheme brings ABP’s total spend on listed buildings to £700, 000 over the past three months, following a £200, 000 investment in the Port of Goole’s last remaining boat hoist. Hull City Council has also made a contribution to the works on Alexandra Dock.

The Grade II listed Hydraulic Engine House and Tower and the Pumping Engine House, along with the Grade II* listed Steam Crane, are undergoing a programme of restoration which includes the replacement of roofs and windows, as well as new guttering. The work is being carried out by Lincolnshire building and civil engineering specialists A Torn Construction Ltd.

The structures, which were built in the 1880s, were crucial to the operation of the port at the time. The Hydraulic Engine House and Tower contained boilers and engines for the hydraulic system, which operated much of the dock including the lock gates, while the Pumping Engine House contained equipment used for draining the dry docks and raising the water levels of the dock itself.

The steam crane had a lift capacity of 100 tons and was regularly used to manoeuvre heavy goods. Its last lift was performed in 1977 when it was deployed to unload a steam locomotive for the Keighley and Worth Valley Railway.

ABP Head of Projects Humber, Simon Brett said: “We’re very fortunate to be able to work on these wonderful remnants of the city’s maritime heritage and make sure they remain in place for future generations of our community to enjoy.

“We’ve worked closely with Hull City Council’s conservation team and our contractors to ensure all works are carried out sympathetically and to the highest possible standard and while there are no firm plans for their immediate future, we now have the option of bringing them back into use should we want to.”

Leader of Hull City Council Cllr Stephen Brady said: “We’ve been working with ABP for some time to ensure that these historic structures can be preserved. Heritage is important for understanding how our city has developed and influences future development such as Green Port Hull, therefore we see the Council’s investment as a major contribution to safeguarding this city’s proud maritime history for future generations.”

The works are scheduled to take 26 weeks and will be completed later in the year.