Finns ready for the fight + How to follow race day #2 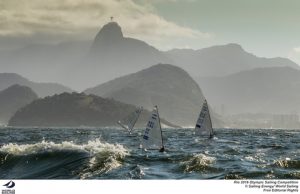 Wind out what’s on the agenda at the Rio 2016 Olympic Sailing Competition today and find out further information on how to follow the racing, watch the tracking, download imagery and following World Sailing on social media.

Today’s winds are set to be a little lighter than day one, with a forecast of around 10 knots from the south. Once again Christ the Redeemer and the mountain tops around Rio are covered in low-lying cloud but we’re still expecting some sunshine later in the day, ready for the start at 13:00 hours local time.

It’s the first day of action in the Finn class, with the heavyweights of the sailing world about to square up to each other. Like the other one person dinghy fleets that started on day one, the Finns will be competing in a 10-race series, with the top 10 qualifying for the final Medal Race.

The Finn Medal Race of London 2012 produced one of the biggest dramas of the Games, and many of the main contenders are back again to see if they can get their hands on that gold medal which slipped away to Ben Ainslie (GBR) in the dying seconds of the race.

Amongst the old hands are the 2012 silver medallist Jonas Hogh Christensen (DEN) and Jonathan Lobert (FRA) who clinched bronze. Pieter-Jan Postma (NED) put it all on the line for gold four years ago but ended up fourth, so no one wants it more badly than the Dutchman.

Brazilian hopes will be riding with Jorge Zarif who was Finn World Champion in 2013. However, standing in everyone’s way is Giles Scott (GBR) who has gone almost undefeated in the past four years and whose four world titles make him one of the all-time greats in the Finn. For all those world titles, this is still Scott’s first time at the Olympics.

Will the Briton be able to take the pressure that goes with being the favourite? We’ll find out at 13:00 when the Finns compete in two races, each with a target time of 50 minutes. They’ll be racing on the Pão de Açucar (Sugar Loaf Mountain) course.

On day one, the Escola Naval (Naval School) course threw a few curveballs at the singlehanded fleets. Today it’s the turn of the Men’s Windsurfer and Women’s Windsurfer fleets to take on this tricky course, as they line for races 4,5 and 6 in their 12-race series before the Medal Race. Will the men be able to stop the charge of Nick Dempsey (GBR) who streaked into the lead yesterday with an incredible scoreline of 1,1,2? Will the women be able to get a grip on Charline Picon (FRA), who matched Dempsey’s performance with a 1,2,1?

Reigning Olympic Champion in the men’s fleet, Dorian van Rijsselberge (NED) still had a great day to lie in second place ahead of Byron Kokkalanis (GRE). The names behind Picon in the women’s fleet are less expected, with the young Stefania Elfutina (RUS) in second place ahead of Flavia Tartaglini (ITA). The 2012 Olympic Champion Marina Alabau (ESP) had a solid day to lie in fifth overall but Bryony Shaw (GBR) sits in 10th and the reigning World Champion Malgorzata Bialecka (POL) is back in 15th.

The Men’s and Women’s One Person Dinghies move North to compete on the Ponte course for the first time, up at the top of Guanabara Bay. Both fleets are set to compete in two 50-minute races.

The big news overnight is that yesterday’s winner in the Women’s Laser Radial fleet, Lijia Xu (CHN), was disqualified after Paige Railey (USA) successfully brought a protest against the reigning Olympic Champion after arguing that the Chinese sailor had failed to execute her penalty turn in time. This drops Xu down the rankings to 23rd, elevating the London 2012 silver medallist Marit Bouwmeester (NED) to the top of the scoreboard. Gintare Scheidt (LTU) almost had a great day yesterday, but even her victory in race 2 was not enough to cheer her up after the Lithuanian discovered she’d been disqualified for starting too soon in race 1, when the 2008 silver medallist crossed the finish line in 2nd place only to discover her expensive start-line error.

Meanwhile in the Men’s Singlehanders, Gintare’s husband Robert Scheidt (BRA) had experienced a very similar day, bombing out with a 23rd in race 1 but emulating his wife by winning race 2. The five-time Olympic medallist still sits in a respectable seventh place, with a number of his main rivals further behind him in the rankings. Tom Burton (AUS) and reigning World Champion Nick Thompson (GBR) lie in 10th and 11th respectively, while the London 2012 silver medallist Pavlos Kontides (CYP) has a lot to do back in 19th. Setting the early pace are Tonci Stipanovic (CRO) and Julio Alsogaray (ARG) who sit at the top of the board with six points apiece. Lying in third is Sergei Komissarov (RUS)