Capital Link’s New York Maritime Forum took place yesterday at the Metropolitan Club, a preferred venue for such events over the past few years.  We covered this event live on our Twitter feed throughout the day.  There was a rich agenda with two parallel tracks, one taking place at the usual large West Lounge on the first floor and the other at the smaller but equally impressive Library room on the second floor.  A large number of speakers exchanged their views on the markets and the global economy in front of large audiences at both rooms.  John Catsimatidis, the prominent Greek-American entrepreneur, introduced Kathleen C. Hochul, the Lieutenant Governor of New York State, who reiterated her support for the shipping  industry as vital part of the State’s economy.  The cocktail reception was, as usual, an opportunity to mingle and comment on the day’s events. 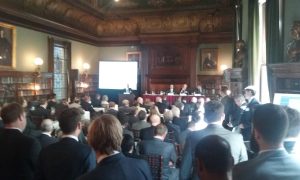 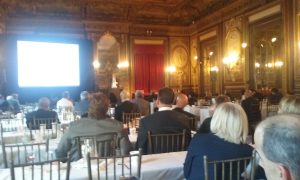