Aussie gold rush on the shores of Rio de Janeiro 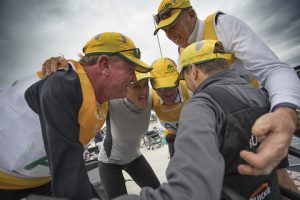 There was Aussie elation at the Marina da Gloria on day five as the Rio 2016 Paralympic gold medals were wrapped up in the Two Person (SKUD18) and Three Person Keelboat (Sonar) with a day to spare.

Daniel Fitzgibbon and Liesl Tesch in the SKUD18 were yet again on fire as they took two bullets from two races to seal the first ever Paralympic sailing title defence in commanding fashion.

In the Sonar, Colin Harrison, Russell Boaden and Jonathan Harris go in to the final race with a healthy 24-point lead and a guaranteed gold medal that ensures Advance Australia Fair will ring out on Flamengo Beach twice come the Medal Ceremony.

It was looking like the Australian anthem could be played three times as Matt Bugg came ashore with a four point lead in the One Person Keelboat (2.4 Norlin OD) only to be disqualified from the final race, demoting him to third and promoting Great Britain’s Helena Lucas to the top spot.

From start to finish, Daniel Fitzgibbon and Liesl Tesch have made the head of the fleet their own. From ten races they have eight wins and two second place finishes to sit on 10 points overall with a lead of 21 points over John McRoberts and Jackie Gay (CAN) in second. They wrapped up the gold with two races to spare.

But just how have they done it, for Tesch the inspiration comes from one man, “Australian sailing legend John Bertrand told us, “loose as a goose”, and I think all those conditions getting flung at us out on the Bay, we are just so adaptable and able to handle it. We put in the hard yards before we got here and its paid off.”

Tesch is known around the boat park as being a larger than life character and often refers to sailing as ‘a crazy sport’, so when playfully asked if Tesch is the crazy one, Fitzgibbon agrees with a laugh, “Sometimes it does helps to have a crazy partner. But we can adapt to everything, we can deal with craziness and deal with instability and come out on top.”

His sailing partner isn’t the only person Fitzgibbon acknowledges, “We have the best support crew around with coach Geoff Woolley and Tim Lowe. Tim has been with me since the silver in Beijing [2008] and he puts more in to the SKUD than anyone. If he was paid by the hour we would all be bankrupt.”

With talk moving from their own achievements, it shows the camaraderie in the Aussie camp that celebrations will be put on hold for a little bit, as Tesch explains, “It’s awesome to have the Sonar boys in the gold medal position as well, but we really got to hold it together for Matt Bugg to give him all our energy and support to get him over the line.”

Half interrupting, Fitzgibbon says, “Guess what. We are the first back to back Paralympic gold medal sailors in history.” That fact is met with the usual loud and excited whoop from Tesch.

With the gold medal sewn up, the fight is on for silver and bronze. McRoberts and Gay hold the silver medal position at present after a 2,6 day to finish on 31 points. One point back is Great Britain’s Alexandra Rickham and Niki Birrell who scored a 4,5.

With a 2,5, Polish world champions, Monika Gibes and Piotr Cichocki, have some work to do and need to put a few boats between themselves and both Canada and Great Britain if they are to make the podium. They currently have 36 points.

With Fitzgibbon and Tesch securing gold with two races to spare, counterparts Colin Harrison, Russell Boaden and Jonathan Harris were next in line to secure another Australian gold ahead of the final race.

Yet again consistency was the key as a second place gave the Aussies a strong advantage going in to race ten. All they had to do was finish in the top 11 places for the race and the gold was theirs. They won the race just to put the shine on it.

Fresh off the water Harrison said, “It’s just elation. It’s been a long time coming and it feels great to get there. I don’t know yet, still trying to work it out, I can’t describe it. There’s a lot of emotion.”

Harrison couldn’t quite find the words to describe the win, but he found some when it came to why the whole Australian Sailing Team have been doing so well, “I think we have just got the best work ethic, culture, support and everything going on in the background is all about achieving success. That’s what we felt over the years and that’s why we are here today, without a doubt.”

For Harris a particular example of this support came to mind, “Going to Miami [USA] earlier on this year was a really important regatta, getting to sail against the Americans and Canadians there. We couldn’t afford to go but the team got behind us and somehow the money appeared and we got some tickets and accommodation and we were there. Things like that have helped all the way through.”

Being consistent at Rio 2016 was no fluke for the Australian Sonar team. They have been consistent all year, and longer, leading up to the Paralympic Games, but it has always been that little bit out of reach for them, until now, “What’s been frustrating is, in the last three years, we’ve always been on the podium but always a point or two away and it’s been frustrating but you know what?” asks Harris, “This is the one that obliterates all those memories. Being the last Paralympics for sailing, it’s a good one to have won.”

The Australian win was largely helped by their nearest rivals at the start of the day, USA, faltering. Current world champions Alphonsus Doerr, Hugh Freund and Bradley Kendell were within reach of the gold at the beginning of play, but with a disappointing eighth and discarded tenth they fell too far back to challenge for the top step on the podium.

The Americans hold on to second with 43 points, but their North American neighbours and training partner, Canada, are just one point behind on 44. Paul Tingley, Logan Campbell and Scott Lutes finished the day with a seventh and a second in the final race of the day.

In fourth place on the leaderboard with 48 points are London 2012 bronze medallists, Norway. Greece and New Zealand are next on 49 points, just one point ahead of Germany on 50.

There is still all to play for in the Sonar for silver and bronze Paralympic medals.

Great Britain’s Helena Lucas leads the 2.4 Norlin OD fleet, but it could have all been so different.

When the boats docked at the Marina da Gloria, Australia’s Matt Bugg was holding a guaranteed Paralympic medal and a four-point advantage at the top. But in a change of fortunes, Bugg finds himself with a lot of work to do just to make sure he doesn’t leave Rio 2016 empty handed after a jury decision went against him and in favour of the protestor, Arturo Montes-Vorcy (ESP).

“Today was a terrible day of sailing,” Seguin said laughing, “I was really close with the other guys, especially with the American [Dee Smith] who was fighting for the podium today, but finally it was really good for me. Two second places. I am really happy tonight because I’m on the podium.”

Seguin’s second win of the day was later upgraded to first as the Bugg protest result trickled through the fleet.

Champion in Athens 2004, silver in Beijing 2008 and fourth in London 2012. Seguin is happy to be back on the medal trail, “It’s my third medal. It’s just crazy. It hasn’t sunk in yet,tomorrow maybe. I’m still in the race [for gold] and we will see tomorrow.”

That race for gold will be against the reigning champion Helena Lucas. Lucas sits on 25 points and just one point above Seguin on 26. It’ll be a shootout for gold on the final day.

With the protest changing Bugg’s final race bullet to a disqualification, the Aussie fell from top to third where he sits with 35 points. Sailing consistently all week, Bugg finished 14th in Race 9, which he counts, and now finds himself in a fight for bronze with Dee Smith (USA).

With silver and bronze still up for grabs in the Sonar and SKUD18 and a tense race for gold in the 2.4 Norlin OD, the final race day will welcome a full house of spectators lining the sands of Flamengo Bay with racing scheduled to start at 12:00 local time.