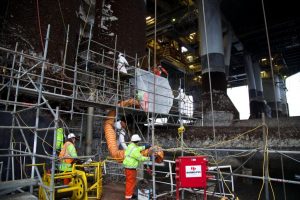 At work on Ocean Endeavor

The Harris Pye Engineering Group has successfully completed repair works during the two-stage multi-million dollar Diamond Offshore demobilisation project for their  semi-sub rig Ocean Endeavor from the Black Sea, which completed its contract in January 2016..

The initial phase of the repair work, which started in December 2015, while the rig was offshore Constanta, Romania involved cleaning of mud, brine, base oil and skimmer tanks. Steel repairs were carried out on a main column blister. The removal of three Seatrax crane pedestals, which  included the supply and installation of internal steel stiffening to the pedestals, guides and jacking points, plus handling trunnions, were all required prior to cold cutting of the pedestal which coincided with the arrival of the heavy lift crane to remove them.

Additional work awarded to Harris Pye in Romania was blasting and painting of four primary column ballast tanks. During the surface preparation steel renewal was added to the project – steel frames, piping, access trunks etc, out of which approx 24 tons of steel work was completed in Constanta. The blasting of all four tanks back to white metal was completed, two tanks received a first coat of paint and two tanks were fully coated before Ocean Endeavor departed from Romania to Fincantieri Shipyard in Palermo, Italy via a pre-booked scheduled heavy lift vessel. 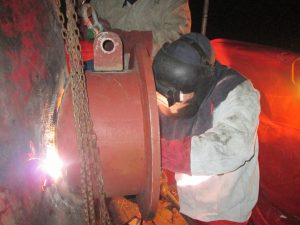 Another view from the work on Ocean Endeavour

“The project was not without its challenges, but we relish those,” explains Harris Pye’s Chief Technical Officer, Chris David. “Painting and blasting of the four ballast tanks had to be performed within a one month period. An additional 40 tonnes of steel was required to ensure the work on the tanks was completed within the required timeframe; this had to be brought in from other parts of Europe.

“All labour was from the local market, with equipment and materials coming from mainland Europe and the UK. Support to the onsite project team was provided by our workshop in Llandow, Wales which undertook any pre-fabrication required, with Harris Pye UK (HPUK) stores (tools and equipment) and the HPUK purchasing department utilising local suppliers where possible and outsourcing further afield into mainland Europe for items not available locally, to ensure work was able to continue accordingly

“Once Ocean Endeavor reached Palermo, the Harris Pye repair team mobilised to work on the remaining steel repairs, and painting of the ballast tanks, including an additional contract to repair a section of column diagonal brace. All works were completed on schedule.

“The six-month long project enabled us to use specialist equipment including a 40 cubic meter per minute high pressure oil free compressor (no oil fumes in the compressed air) which worked 24/7; and Falch 2500 bar hydro blasting equipment.”

“The Harris Pye project team had a very methodical and professional approach to all the projects awarded to them,” stated Diamond Offshore Project Manager Dhaval Mehta. “All projects were completed in a timely manner to the satisfaction of Diamond Offshore’s stringent standards, Class and Statutory rule requirements.

“The project team worked very well with all the other vendors involved and was accommodating with certain last minute changes, without impacting on the end results of the project. The entire Harris Pye site team was well focused on customer satisfaction while keeping safety as the primary focus during the entire project. They also actively participated in Diamond Offshore safety meetings and provided valuable input. A job very well done by the entire HP team involved with the Ocean Endeavor demobilisation project.”

Harris Pye has supported Diamond Offshore on several projects in the past and continues to do so to date in order to build on the existing strong business relations between the two companies.

Further information on Harris Pye is available at www.harrispye.com

GEODIS to make its debut at MINEXPO International, Las Vegas