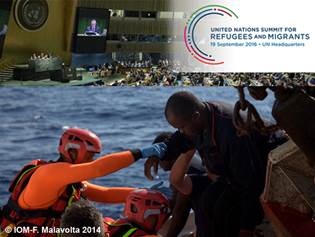 IMO is at the high-level UN Summit for Refugees and Migrants being held at the UN Headquarters in New York, United States (19 September). A number of IMO treaties include provisions relating to migration by sea. These includeSOLAS chapter V on Safety of Navigation, which requires the master of a ship at sea able to provide assistance to persons that are in distress at sea, to do so regardless of the nationality or status of such persons or the circumstances in which they are found.

Guidance on the legal framework for rescue at sea has been prepared by IMO, International Chamber of Shipping (ICS), and UNHCR.  IMO has produced a series of three short films examining unsafe mixed migration by sea.

The films explore the following perspectives:  “The migrants’ story”, “The rescuers’ story” and “The international response”. Chris Trelawny, Special Advisor on Maritime Security and Facilitation, is in New York representing IMO. The UN General Assembly adopted the New York Declaration for refugees and migrants, which refers to the pledge to facilitate orderly, safe, regular and responsible migration and mobility of people, including through the implementation of planned and well-managed migration policies.

Addressing Round Table 6 of the summit, on “Addressing vulnerabilities of refugees and migrants on their journeys from their countries of origin to their countries of arrival”, Mr Trelawny noted that IMO Member States recognized that using the search and rescue systems enshrined in the SOLAS and SAR conventions to respond to mass mixed migration was neither foreseen nor intended.

Although Governments and the merchant shipping industry would continue to rescue operations, safe, legal, alternative pathways to migration must be developed, including safe, organized migration by sea if necessary. He also asked the meeting to record the thanks of the IMO Membership to the search and rescue authorities, navies and coastguards, as well as to the Masters of the hundreds of merchant ships diverted from going about their lawful occasions to rescue mixed migrants, with attendant risks to the seafarers concerned.