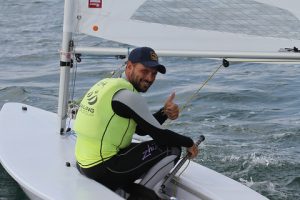 Medals slipped away and medals were snatched on the final day of the Sailing World Cup Qingdao as racing came to a close confirming the seven fleet podiums.

There was some last minute drama as the double point Medal Races shook up some of the fleets and left a few thinking of what might have been in the waters of the Beijing 2008 Olympic Sailing Competition.

Knowing that he really only needed to worry about previous years winner, Great Britain’s Lorenzo Brando Chiavarini, Stipanovic could have entered in to a Match Race, but the memory of the Rio Olympic Medal Race where he was penalised at the start in his duel with eventual winner, Australia’s Tom Burton, the Croatian changed tactics at the last moment.

Talking through the Medal Race start, Stipanovic said, “I just wanted a good start, close to Lorenzo but not make the same mistakes as the Olympics. In the end I decided to just drop back. From there I saw Lorenzo didn’t have a good start and went to the right when everything was saying to me that the left side would be better, so I thought ‘this is my chance’.”

Stipanovic eventually finished fifth, but with Chiavarini behind him in seventh, the gold was his. For Chiavarini the gamble to go right meant he dropped from the podium entirely.

Winner of the Medal Race, Cyprus’ Pavlos Kontides leapfrogged in to silver medal position overhauling the Briton on the final day. Italy’s Giovanni Coccoluto also made the podium in bronze position thanks to his third place finish in the Medal Race, the tie breaker he needed as he sat on equal points with Chiavarini.

Stipanovic has already confirmed he will be in Melbourne, Australia at the Sailing World Cup Final in December, but for the gold medallist the venue will be a new experience, “I haven’t really sailed in Melbourne and don’t really know what to expect. I’m also doing the Star Sailors League Final close to the Sailing World Cup Final so I won’t have much time there to prepare, but I am happy to go in to it with some medals.” 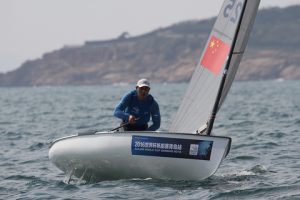 Dongshuang Zhang (CHN) has been dominant all regatta in the Laser Radial and she confirmed her gold with a third place finish in the Medal Race.

With a big lead going in to the final day and high finishes all week, Zhang was flying, but she did have to sweat it out a little, “Today was very hard. I feel very lucky because there was a lot of people OCS and I wasn’t sure if I was one of them. But it’s great to know now I have won the gold.”

In total six of the ten boats scored maximum points in the final race of the regatta. Luckily for Finland’s Monika Mikkola, she was not one of those.

Mikkola herself had a comfortable points buffer back to bronze, but an OCS would have seen that gap disappear. In the end though, Mikkola finished fourth and with it a silver medal.

The Finnish sailors medal was helped by third placed Rubei Yuan being one of the boats disqualified. This gave the opportunity for Malaysia’s Nur Shazrin Mohamad Latif to sneak on to the podium. She would need to win the Medal Race.

Unfortunately she could only manage a second with the bullet going to Finland’s Erica Partanen. The bronze was Yuan’s by just one point.

The impressive Zhang finished on 13 points for the gold, Mikkola had 27 for the silver and Yuan 59 for bronze.

Chunzhuang Liu (CHN) knew that if he won the Men’s RS:X Medal Race the gold was his. He won the race and won the gold.

Liu started the Sailing World Cup Qingdao well with three bullets in four races, but from there began to let his rivals eat in to his lead. The final race of the regatta Liu had a target to shoot for which would take him over the line and on to top spot on the podium, a target which he hit bang on the money.

For Liu and his Chinese counterparts it would seem that they like when the winds pick up and for Liu, he just thought he handled the conditions thrown at him better than the rest, “We prefer a bit more wind and the wind wasn’t strong here, but I think I just dealt with it the best out of the fleet.”

In the Women’s RS:X Hongmei Shi (CHN) already knew she had a guaranteed gold so was sailing in the Medal Race as a victory lap. Finishing fourth in the final race gave Shi 26 points sitting top of the leaderboard.

The race was on for silver in the fleet, and Jiao Ma (CHN) won that personal battle with compatriot Xiaoqing Yu (CHN).

Ma placed second in the Medal Race while Yu was down in seventh. The difference in final race placements meant the two Chinese windsurfers were tied on 54 points. Ma claimed silver thanks to her final race finish. 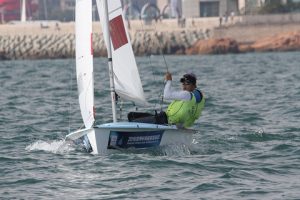 Winning gold in the Men’s 470 was China’s Hao Lan and Chao Wang. Finishing the regatta with a third place the pair totaled 30 points overall and won with a margin of eight points back to second placed Liangdao Weng and Youjian Wen (CHN).

Weng and Wen only just scrapped in to silver medal position as third placed Zangjun Xu and Wei Wang (CHN) took the bullet in the Medal Race. Xu and Wang had 40 points, but with a fourth place Weng and Wen came in just in time to take the silver with 38 points. Just one more place and they would have been one step lower on the podium.

Silver medallist’s Shasha Chen and Haiyan Gao took the bullet in the last race which piled the pressure on Wei and Xu, they had to take second place or the gold was gone. They got their second.

With that placing Wei and Xu sat on 17 points for the week with Chen and Gao just behind on 19 points.

As the fight for gold and silver was playing out in front of them, Shengnan Ni and Lizhu Huang (CHN) crossed just behind in third place, and with that third overall and a bronze medal.

All regatta Lei Gong (CHN) had been in control of the Finn fleet. Not finishing lower than second, Gong was on a high and heading for gold. That was until the Medal Race.

In his lowest finish Gong came in in fourth position to let his nearest rival, He Chen (CHN), snatch the gold from under his nose.

Chen took the final bullet on offer and that gave him just enough to overtake Gong, winning by one slender point.

Rounding out the podium was Xin Li (CHN) who had 21 points following a second place finish in the Medal Race.

What will be known as a light wind, strong current regatta, Sailing World Cup Qingdao was drawn to a close as officials handed out the medals and prize money to the victors. The Sailing World Cup now moves on to the showpiece finale in Melbourne, Australia in December

Project Forward in talks with Shell LNG to support next phase