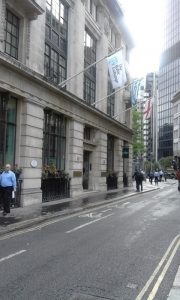 Results of voting at Court Meeting and General Meeting

The Baltic Exchange is pleased to announce that shareholders approved the Scheme of Arrangement proposed in the circular posted to shareholders on 24 August 2016 (the “Scheme Circular”) at the meeting convened pursuant to an order of the High Court and held earlier today (the “Court Meeting”).

At the Court Meeting held on 26 September 2016 at the Company’s registered office at The Baltic Exchange, 38 St Mary Axe, London EC3A 8BH, the resolution to approve the Scheme of Arrangement between SGX and Scheme Shareholders, proposed to be made under Part 26 the Companies Act 2006 (the “Scheme”), was passed by the requisite majority of Scheme Shareholders by way of a poll.

The results of voting at the Court Meeting were as follows:

At the General Meeting held on 26 September 2016 immediately following the Court Meeting, the resolutions set out in the notice of the General Meeting included in the Scheme Circular were both passed by the requisite majorities of shareholders by way of a poll. The resolutions comprised a special resolution approving the Scheme and certain corporate authorities requisite to the Scheme (including changes to the Company’s articles of association) and an ordinary resolution to approve the Special Dividend.

The results of voting at the General Meeting were as follows:

The above figures include votes cast by way of proxy. Votes withheld are not counted in the proportion of votes “for” or “against”.

Implementation of the Scheme remains subject to the satisfaction of certain conditions which are set out in Part Three of the Scheme Circular. These include: (i) the UK Financial Conduct Authority having given notice in writing under section 189(4) of the Financial Services and Markets Act 2000 (“FSMA”) of its approval (or being treated as having given its approval by virtue of section 189(6) of FSMA) of the acquisition of Baltic Exchange Derivatives Trading Limited (a subsidiary of Baltic Exchange) which is a UK authorised person; and (ii) the High Court making an order sanctioning the Scheme at a Court hearing which is expected to take place as soon as possible following such FCA approval being obtained.

Capitalised terms used but not otherwise defined in this announcement have the meaning given to them in the Scheme Circular.